This summer the discontent with the Sports Direct tycoon has seemingly reached a nadir with the Newcastle supporters, of which Chopra is certainly one.

He took to his personal Twitter account on Thursday to hammer the club chief: “Mike ashleys own words in 2008. .”Newcastle’s best asset has been, is and always will be the fans.

“His plan was to exploit you from the start. He bought the club for your loyalty. Enough is enough. Make a stand. #onegoalashleyout #BoycottArsenal.” 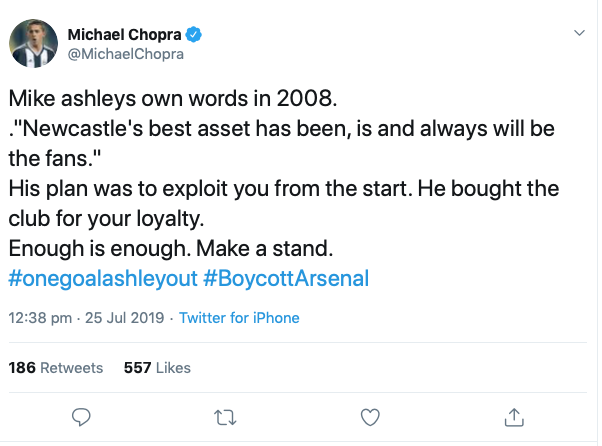 It’s no surprise that Chopra, a born and bred Geordie, is so vehement in his opposition of Ashley. Basically he is simply calling for the supporters to actually take a stand and do something to try and drive the owner out of the club, namely to boycott the first Premier League game of the season against Arsenal at St James’ Park. You can’t blame him for urging the fans to strike, because that’s exactly what they need to do. There will always be those who go by blind loyalty to their football club and preach that you should stick by your team no matter what, and that’s all well and good. Everyone is entitled to their opinion and fans can support their side in whatever way, shape or form they choose. But when you have an owner as tyrannical as Ashley, who has sucked the very lifeblood out of a club, and single-handedly reduced its prestige and its chance for success, then something must be done – and the fans need to do it, nobody else is going to. A boycott, if ever one should occur, needs to come from the Newcastle supporters against the Gunners.