Martin: Newcastle fans have choice between club and owner

Former Newcastle United midfielder Mick Martin has claimed that the club’s supporters have a stark choice about owner Mike Ashley.

The Sports Direct tycoon’s ownership of the Magpies has reached a nadir this summer with the departure of Rafael Benitez and sale of Ayoze Perez, and Martin believes the fans must do one of two things next season.

“If you’re anti-Ashley then you don’t get a new season ticket; if you’re a Newcastle United supporter then you renew your season ticket,” he told Love Sport Radio. “It’s a choice between your club and your owner.

“Your owner’s been, particularly, handling this situation pretty bad. He knows that the punters don’t like him in the first place, and they like him even less now Benitez has gone, and lesser still now all these players are gone. The best thing that could happen at the moment is that somebody comes out of the blue and buys the place.” 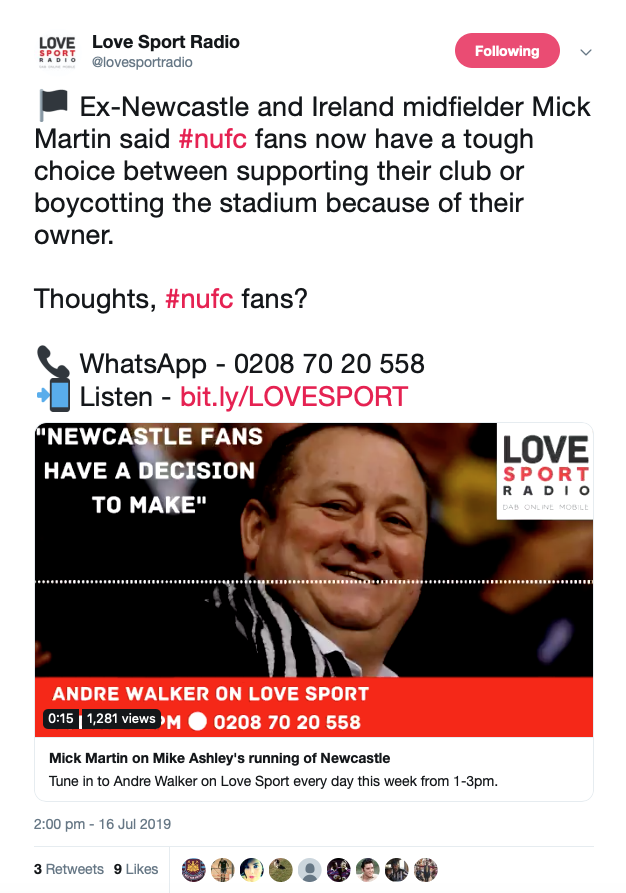 Martin is right, this is the dilemma facing Newcastle supporters this summer. Do they continue to support their club regardless of Ashley’s actions and renew their season tickets for another year? Or do they say enough is enough after Benitez’s departure and cancel their tickets in a bid to send a message to Ashley. Obviously if the fans were united and all agreed to snub season ticket renewals, then it would certainly make an impression on the owner. However, if some do but others don’t, then the ones who don’t will just see their seats taken by other fans of the club. So it’s tricky for the Toon Army, but it does appear to come down to a choice between club and owner. Obviously you don’t want to be seen to be giving up on your team, but by the same token, you want to do whatever you can to see Ashley ousted so the Magpies can be restored to their former glory. It’s a really difficult choice and is probably one that will divide the fanbase.