Some Newcastle United fans have taken to Twitter to fume at Richard Keys for a tweet he posted about Rafael Benitez, in which he makes several claims to which Magpies fans have – naturally – reacted quite angrily to. And they have every right to call Keys – for example – “deluded”. One claim he makes is that Newcastle owner Mike Ashley was tired of Benitez’s “moaning”, but the fact is that asking for ambition and a transfer budget of more than £60million is not moaning at all. In fact, it would have allowed Benitez to do what he planned to do all along – take the club forward. Also, while Newcastle are of course not in danger of going bust any time, they are far from what fans would call financially stable, as if they were truly that, then the club would be able to spend as they please without having to worry about an owner who is so restrictive. So overall, these fans have every right to fume at Keys for the tweet below. 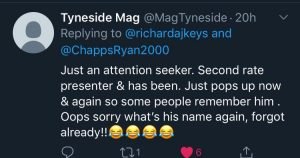 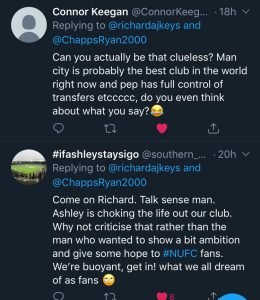 Richard you are actually a complete weapon

Why u so anti Rafa? Why support the poison & have his clowns on your TV station. Ca§hley brought nothing but misery, dragged all hope, enthusiasm from such a great city & club. Stealing from us while laughing. Your ignorance is beyond belief. After over 40 years gave ticket up.