Manquillo must step up Newcastle United’s pre-season friendly victory over Hibernian on Wednesday made certain things a lot clearer for Steve Bruce, as he looks to continue the progress made under Rafael Benitez.

Joelinton staked his claim to lead the line at St James’ Park with a goal, whereas Sean Longstaff continued his injury rehab with a great showing in which he also collected a goal from distance.

Javier Manquillo was one of the senior Magpies men who impressed, with the Spaniard starring both in defence and attack, getting forward at every opportunity whilst not leaving his side vulnerable at the back.

The 25-year-old only managed to make 12 starts in the Premier League last season at wing-back, with six added cameos from the bench. Should Bruce switch style it could suit Manquillo, who could really grasp his opportunity with both hands.

Despite Manquillo being the clear option to take the baton forward at right-back for Newcastle, the Magpies have still been reported to have had a £4.5million bid rejected for Amiens defender Emil Krafth [The Sun]

Manquillo is surely set to soften that blow with his performances, with the Spaniard set for the spotlight at St James’ Park.

Comparing the two via WhoScored, the 25-year-old is ready to make Newcastle’s rejected bid a distant memory. 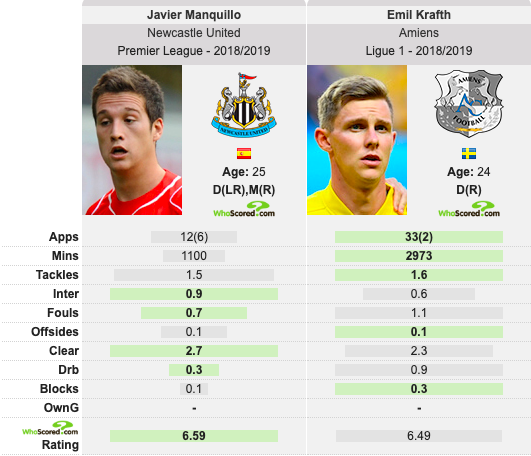 Krafth slightly averaged more tackles, but Manquillo was the one who averaged more interceptions and clearances – as well as conceding fewer fouls and was dribbled past fewer times.

On top of that, the Newcastle man also delivered more assists despite the Swedish man playing almost three times the number of minutes.

Manquillo also averaged more key passes and completed more dribbles – two stats which prove the 25-year-old can combine the different aspects of attack and defence to succeed next season.

The blow of the rejected bid will surely be softened by the potential emergence of Manquillo, who is more than ready to cement his place under Bruce next season.