Newcastle United midfielder Sean Longstaff wants to be given permission to speak to Manchester United, according to journalist Kaveh Solhekol.

The Sky Sports reporter revealed the news on his personal Twitter account on Friday, claiming that the 21-year-old is keen to speak to their Premier League rivals.

However, Ole Gunnar Solskjaer’s side are thought to currently be weighing up how much to offer for the Magpies youngster, after the Evening Standard reported that the Red Devils have been shocked by Newcastle’s £50million valuation.

Solhekol does stress that, despite wanting to speak to United, Longstaff remains committed to the north east giants and understands if they don’t want to sell him. 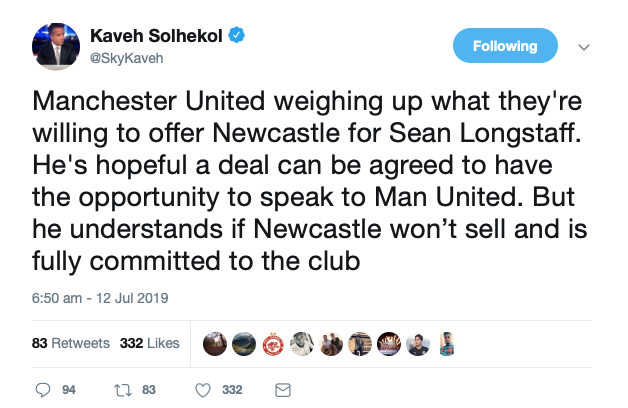 Longstaff seems to be handling this perfectly, to be honest. Yes, he’s clearly curious about the opportunity of playing for one of the biggest clubs in world football, but he’s not prepared to kick up a fuss and force through a move away from St James’ Park. Clearly he understands Newcastle’s position, that they don’t want to sell their most valuable young player, but at the same time he does want to speak to Solskajer’s side. United aren’t in the finest moment in their history, but they are still Manchester United and they still command respect and are an attractive proposition for players. At the moment, though, it would seem that as long as Newcastle stick to their £50million valuation they’ll keep the youngster. United don’t want to pay that amount and Longstaff doesn’t want to cause a fuss, so the Magpies will end up keeping their man as long as they remain resolute on their valuation of him. Seems pretty straightforward, doesn’t it?