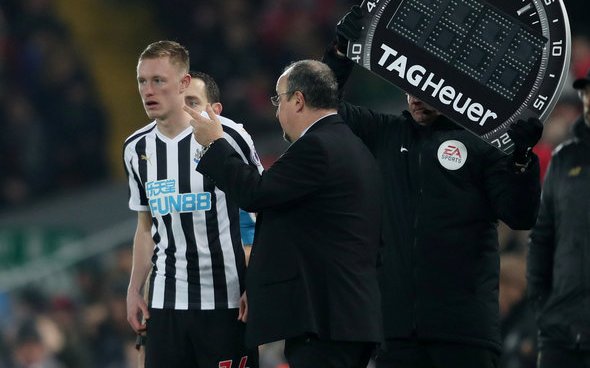 Sean Longstaff is considering his future at Newcastle United following Rafa Benitez’s exit at the end of last month, according to the Mirror.

The newspaper claimed via their live transfer blog on Sunday [01:41am] that Longstaff is “bitterly upset” by Benitez’s exit and amid interest from Manchester United, he is weighing up his options ahead of next season.

It is understood that Ole Gunnar Solskjaer wants to sign the 21-year-old midfielder after he impressed in a breakthrough season at St James’ Park last term.

There is an endless list of why Mike Ashley should have accepted Benitez’s demands and gave the Spaniard what he wanted as long as he signed a new contract at Newcastle. Benitez has been one of the best managers to grace St James’ Park in a very long time and no one has really connected with the fans in the same way as him perhaps since Sir Bobby Robson. Benitez’s exit was bound to lead to a number of players wanting to leave too. Ayoze Perez might not have left for Leicester if Benitez was still in charge as that move went through very quickly as soon as the Spaniard left Tyneside. Newcastle could now lose out on Longstaff, who is the club’s most exciting young player. Last term the 21-year-old impressed for the Magpies as he made nine Premier League appearances up until he picked up a season-ending injury. Although Newcastle could get decent money for Longstaff from Man United, they are better off keeping hold of him.