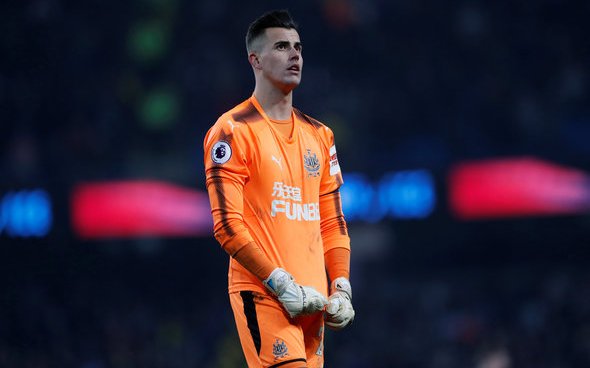 Leeds United have ramped up their pursuit of Newcastle United goalkeeper Karl Darlow, according to Football Insider.

The reliable news outlet claims that Leeds have made an approach to sign the 28-year-old, who is in the final year of his contract at St James’ Park.

It is understood that Leeds are trying to find out whether they can sign the former Nottingham Forest shot-stopper on a loan deal or a permanent one amid doubts surrounding the Elland Road futures of Kiko Casilla and Bailey Peacock-Farrell.

Darlow does not seem to have much of a future at St James’ Park. He made just one appearance for Newcastle last season which came in the 3-1 defeat to his former club Nottingham Forest in the Carabao Cup. Martin Dubravka is the undisputed number one on Tyneside and unless the Slovakia international moves on this summer, it would be unlikely for Darlow to get anywhere near to Steve Bruce’s first-team plans. As he is in the final year of his contract, Newcastle need to try and get rid of Darlow on a permanent basis this summer if they want to make any kind of money on him. Loaning Darlow out wouldn’t be the best idea as that is just accepting that he’d leave for free at the end of next season. Newcastle need to play hardball with Leeds because they’ve made a profit on their transfers this summer and have money in the bank. If they need a new goalkeeper, they’ll have to pay up.