Steve Nickson could be set to hit the jackpot as Newcastle United reportedly close in on signing Hoffenheim striker Joelinton.

According to the Chronicle, the 22-year-old’s agents have been finalising a deal on Wednesday for their client to join the Magpies after Hoffenheim confirmed that the Brazilian played no part in their pre-season friendly against Jahn Regensburg due to talks with a Premier League club.

It would seem that Premier League club is Newcastle as not long before Hoffenheim made that announcement, German newspaper Kicker reported that talks have intensified and a £36.2million switch to Tyneside is now on the cards for the Brazilian centre-forward.

Steve Bruce has only just been appointed as Newcastle’s manager so it would seem as though head of recruitment Nickson has been the man pulling the strings for this reportedly imminent deal.

And even though Newcastle’s hierarchy has been widely – and justifiably – criticised in recent times, credit has to go to Nickson when it is due because this deal for Joelinton could be a real masterstroke by the Magpies recruitment chief.

Joelinton scored 11 goals and supplied nine assists in 35 appearances across all competitions for Hoffenheim last season as the German side finished eighth in the Bundesliga and had a respectable attempt in the Champions League group stages.

The former Rapid Vienna striker did not shy away from the big occasions when playing for Hoffenheim as he bagged goals against some of the biggest teams in Germany like Borussia Dortmund, Stuttgart, Bayer Leverkusen and Frankfurt while also hitting the back of the net against Lyon in the Champions League.

Joelinton will no doubt be tasked with filling the void created by Salomon Rondon’s exit at the end of last season and while the Brazilian did not score as many league goals or supply as many assists, stats by WhoScored show that his overall play up front was better than the Venezuelans.

The Hoffenheim ace completed more key passes, more dribbles and was dispossessed on fewer occasions on average in the league compared to Rondon, who at the age of 29 is a far more experienced striker. 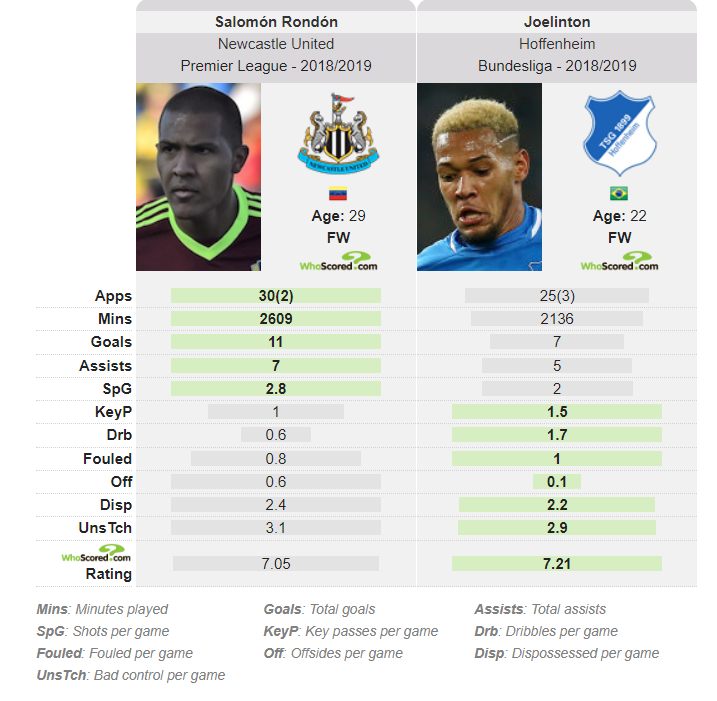 Although it could take a bit of time for Joelinton to adapt to life in the Premier League – as it would with most strikers from overseas – it would be reasonable to expect him to start up front for Newcastle next season and slowly but surely have the impact that Rondon had under Rafa Benitez.

Joelinton is a striker who can do a bit of everything and if he is able to start most of the Magpies’ matches next term, there’s a good chance that he could even score more goals than Rondon, whose biggest downfall in England was his goalscoring record.

As the Brazilian is only 22-years-old, there is every chance that his value could soar at St James’ Park.

We don’t want to give Mike Ashley much credit, but sanctioning a big-money deal for Joelinton is bound to be good business by him and Nickson.