Excitement isn’t usually an emotion that lasts for long when involved with Newcastle United.

Many Magpies’ fans could be forgotten for being overjoyed after the Daily Mail reported that Mike Ashley was set to break the club’s transfer record with a £36million offer for Hoffenheim striker Joelinton.

The Brazilian striker enjoyed a good season in the Bundesliga, and was involved in 15 goals in 30 appearances in all competitions. The 22-year-old also averaged two shots per game as well as 1.5 key passes, highlighting his ability to both score and assist goals [WhoScored].

As usual, the glee didn’t last very long, with German news outlet Kicker claiming that Joelinton is not as close to a move as once suggested, and is still expected to make the trip to Hoffenheim’s training camp in Windischgarsten.

This is a kick in the teeth for Newcastle, who begin their Premier League Asia Trophy campaign on Wednesday with only two recognised strikers – Dwight Gayle and Yoshinori Muto.

That is the worst possible outcome for the managerless Magpies, who at this rate are set to be reliant on a Championship striker alongside a forward who only managed one goal last season.

Looking at the two options Newcastle could be forced to call upon via WhoScored, it only exaggerates how much trouble they could be in next season. 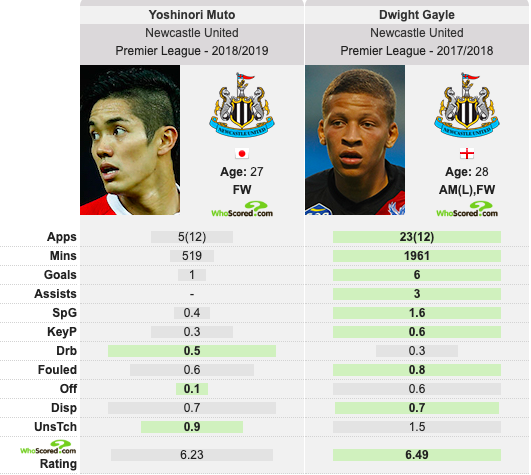 Both Muto and Gayle are not known for their physical presence when leading the line and could be quickly found out if they were to be given the responsibility of playing as a lone striker. In the pair’s previous 52 combined Premier League appearances, they have only managed to find the back of the net seven times.

Japanese international Muto offered no threat last season, averaging a shot nearly once every three games, as well as only averaging 0.3 key passes.

Compare that to Gayle, who only averaged an attempted dribble every three games – a stat not good enough should he want to remain at St James’ Park next season.

Newcastle fans are surely now expecting the worst, with the possibility of a deal for Joelinton being shut down by the latest reports in Germany.