The past week has been an extremely difficult one for the Newcastle supporters, with it now being seven days since the club announced that Rafael Benitez would be leaving the club as manager.

On Monday, the Spaniard released a statement regarding his departure from the Magpies. In it, he stated that he did, in fact, want to remain as Newcastle boss, but that the club’s hierarchy simply didn’t share his vision for the future.

The feelings of the entire Toon Army were surely summed up by BBC pundit and former Premier League midfielder Don Hutchison, who wrote on his personal Twitter account: “This day has always been coming!! M Ashley in charge, doesn’t deserve a club with such loyal fans.”

No doubt Gateshead-born Hutchison will be joined by a union of Newcastle supporters in taking aim at owner Mike Ashley, who has just driven the club’s finest manager since Sir Bobby Robson out of the St James’ Park exit door.

Benitez’s CV speaks for itself, particularly what he was able to achieve on a limited budget and in extremely trying circumstances while in charge on Tyneside. He worked wonders with a sub-par Magpies squad which was punching above its weight throughout his time at the club.

Hutchison’s statement that Ashley doesn’t deserve a club with the fervent fanbase that Newcastle possesses is absolutely bang on. The Magpies fans are some of the most loyal and fanatical in the country, yet Ashley treats them as if they don’t exist. He has his own agenda and that’s it, as far as he’s concerned.

Now, though, the club has been plunged into stasis, unable to operate in the transfer market or conduct tactical work until a new man is appointed. On the eve of pre season training, that’s an embarrassing state of affairs. 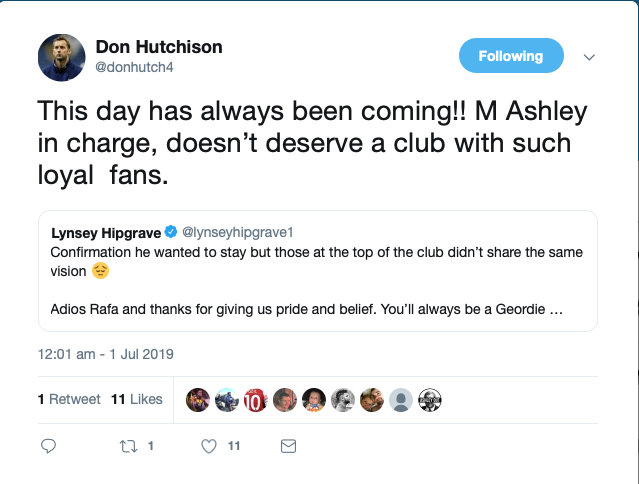