The BBC pundit was responding to former Magpies manager Sam Allardyce confirming to talkSPORT that he turned down the chance to return to St James’ Park as Rafael Benitez’s replacement.

Hutchison is up in arms about the situation on Tyneside: “Crikey we are in a right mess of [*if] those boys are turning Newcastle down,” he wrote on his personal Twitter account.

“Ashley is hell bent on ruining the club. It would never happen coz Newcastle fans are to[o] loyal, but IMO they should stay away 1st home game of the season.” 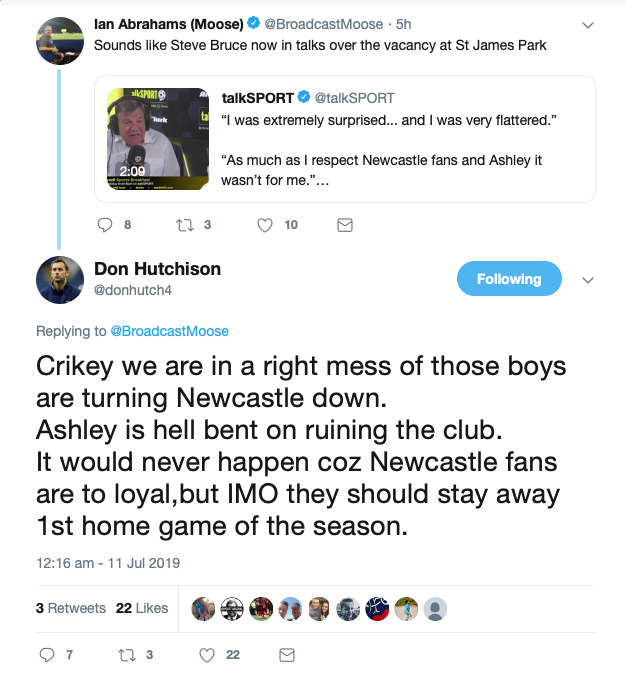 It’s hard to disagree with what Hutchison is saying, here. He is Gateshead born and bred, and played not too far away from Newcastle with Hartlepool United. So he knows the area and he clearly has fond feelings for the club. So it will be difficult for him to see what is happening to it under Ashley. The Sports Direct tycoon won’t actually want to ruin the club, he just simply doesn’t seem to care about it one way or the other. As long as he’s making money he’s happy; he doesn’t actually care what happens on the pitch or how the fans feel. That’s become clear by his refusal to keep Benitez on board and his apparent willingness to replace a world class manager with the Steve Bruce’s and the Allardyce’s of the world. That’s no disrespect to them, but they’re not on Benitez’s level in terms of what they’ve achieved in their career. Hutchison is right to call for a boycott of the first game of the new season. The fans need to hurt Ashley the only place he feels it: his wallet. That’s their only genuine hope of change.