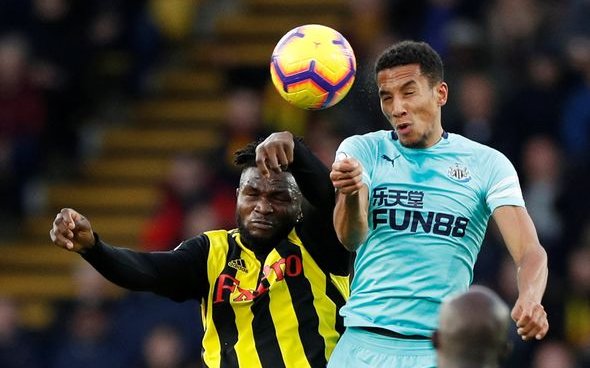 Newcastle United have slapped down an eight-figure price tag of £15million for Isaac Hayden as a quartet of Premier League rivals weigh up making a move, according to the Northern Echo.

The newspaper claim on their website that the 24-year-old midfielder is still angling for a move away due to personal reasons, having tried to leave St James’ Park last summer, and that West Ham, Wolves, Watford and Brighton are all contenders for his signing, as well as a clutch of Championship sides.

It is stated that the situation of Hayden, who made 25 Premier League appearances last season, is not affected by the exit of Rafael Benitez as manager and that he is still looking to leave.

After his performances in the middle of the park, it seems Newcastle are being awfully generous to Hayden by placing a £15million price tag on his head. With Declan Rice, a similar sort of defensive midfielder at West Ham, said to have a £70million asking price, you would expect the Magpies to look for a little more for their own star. Not only was he brilliant in the middle, forming a formidable partnership alongside Sean Longstaff before the youngster’s season was ended by injury, but he has shown remarkable professionalism to remain at Newcastle and perform at the standard he has. It would have been so easy for him to stamp his foot down and try to force a move – as we have seen done so many times before. Any club who does get a hold of Hayden will be getting a down to earth young man who has shown a willingness to put his club first over his personal life. Maybe his dedication to the cause is why Newcastle seem willing to let him go for a figure some would say is below what he is worth.