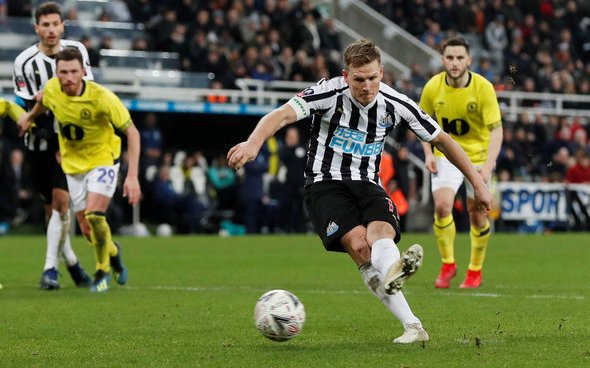 There were plenty of positives for Newcastle to take from their pre-season friendly against Hibs last night.

Joelinton scored his first goal for the club and looked impressive throughout, suggesting he could be a solid player in the Premier League.

And, despite Martin Dubravka not playing, Steve Bruce moved to dispell any rumours about him leaving.

As quoted in the Northern Echo, Bruce said “Martin is fine, he is a top keeper. It was always my aim to give the two lads the 90 minutes in these two games, he is our No 1 keeper. All the stuff circulating is not true.”

However, there was one dark cloud hovering after the 3-1 victory over the Scottish side – a hamstring injury to Matt Ritchie that saw the Scotland international limp off after just 11 minutes.

Brice delivered an update after the game saying, “We hope it’s not serious. That’s the awful thing tonight because we’re a bit shy in that area.

“He’ll have a scan in the next 48 hours and hopefully it’s not too bad. He’s nicked a hamstring. Whether it’s a strain or how serious it is we do not know.”

Some Newcastle fans would have been a bit concerned to hear new manager Steve Bruce describe club-record signing Joelinton as “raw” but he looked the real deal against admittedly weak opponents last night. However, he got his goal and that’s so important for any new striker signing. We’re looking forward to seeing him in action in the Premier League now and we believe he can deliver at least as many goals as Salomon Rondon. That was the good news from last night. Miguel Almiron desperately needs a goal and from what we saw last night, when it does come it will probably be a scuffed effort or one off his knee. He’s doing everything but score at the moment but there’s obviously a good player there who’s just a bit short on confidence. The injury to Ritchie is a troubling one. There’s still hope that it’s not as bad as it looked but if it’s more serious it’s going to be a real blow to the start of the season. Ritchie was a standout last season and notched nine assists in his 39 games for the club. As Bruce said, Newcastle are short in that area and the hope will be that the scan results come back with good news in the next couple of days.