Austin swoop is a bad idea

Newcastle United need to get a move on with their transfer business after the appointment of new manager Steve Bruce on Wednesday, and the attacking area of the pitch is clearly where they need the most investment.

The Magpies have seen three frontmen depart this summer, with Ayoze Perez and Joselu leaving for Leicester City and Alaves respectively, and last season’s club Player of the Year Salomon Rondon heading back to parent club West Bromwich Albion.

That leaves just Dwight Gayle and Yoshinori Muto as senior forwards at St James’ Park. Despite that, though, Bruce must resist the temptation to panic buy his way out of a hole.

That’s why, then, the club must run from the hills from a swoop for Southampton striker Charlie Austin. Football Insider reported on Wednesday that the Magpies are plotting a bid for the Englishman after he was transfer listed by their Premier League rivals.

Yes the team need more strikers, but Austin simply isn’t of the calibre to truly help this Newcastle team. Plus, at 30 years of age he doesn’t exactly fit in with what we have always understood to be a youth-directed transfer policy at the club.

When you look at the statistics from last season it makes for grim reading. Comparing Austin to Gayle and Muto, who would be his competition at St James’ Park, and Rondon, who he’d be a replacement for, is a sure-fire way to see why this move should be avoided.

As per WhoScored, the Saints star scored just two league goals last term, better only than Muto and way behind Gayle and Rondon. Gayle, of course, was operating a tier below in the Championship.

However, in terms of offensive statistical categories, Austin was woeful. He doesn’t top a single one. Gayle scored the most goals and was fouled the most, while even Muto led the way in fewest offsides, dispossessions and unsuccessful touches of the ball per game.

Rondon, meanwhile, registered the most assists, and shots, key passes and dribbles per game. He also came second to Gayle in terms of goals scored.

Austin, meanwhile, was right at the bottom of the pack. So yes, Newcastle need attackers, but not this one. He could never function as an acceptable Rondon replacement. 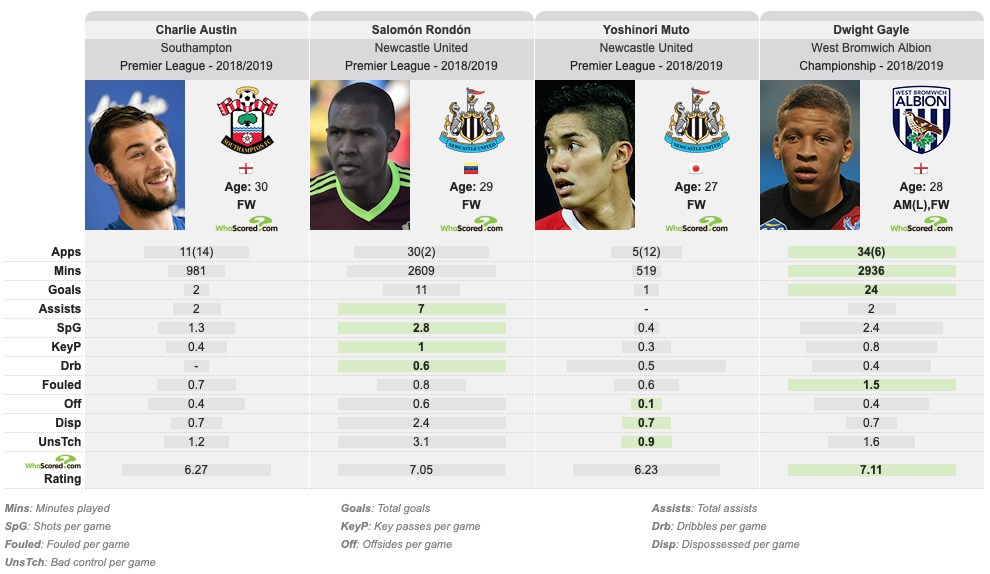