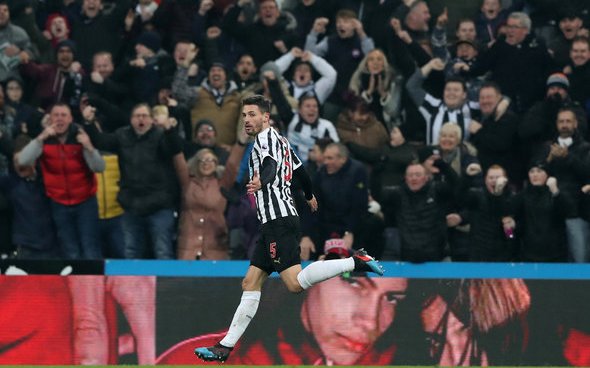 The emergence of Newcastle defender Fabian Schar was one of the few recent positives at St James’ Park.

Schar has been phenomenal in the past year, becoming an integral part of what was Rafael Benitez’s side last season in the heart of a back-five.

The Swiss international joined the Magpies in 2018 from Deportivo La Coruna for what has now become a bargain fee of only £3million. Schar became a mainstay and managed to make 24 appearances after only featuring once in the Magpies first 10 Premier League fixtures.

Schar impressed so much that he has become the subject of interest from AC Milan, with the Northern Echo reporting that the San Siro giants are lining up a bid for the 27-year-old.

Newcastle must do all they can to persuade Schar to stay at St James’ Park, and reject any advances from Italy this summer.

The Swiss enforcer not only impressed at the back but going forward as well, scoring four goals – one of which won the Newcastle goal of the season award.

Schar was a standout performer for the Magpies and would be sorely missed if he was allowed to leave Tyneside this summer. Looking at his stats via WhoScored only proves that point.

The 27-year-old made more tackles (2.5) and interceptions (2.8) on average per game than any other defender for Newcastle, and also averaged an impressive 5.7 clearances per outing.

Schar is also key to Newcastle keeping ahold of possession, averaging 41.4 passes per game, on top of that, the defender also attempted 5.6 long balls – a stat that shows how comfortable he is playing in a side that looks to take advantage of a physical forward.

No matter who the new manager will be at Newcastle, they must make the future of Schar one of their main priorities, with his presence vital in the heart of their defence.