If you’d given a room full of Newcastle United fans an afternoon to sit and guess which of their former players would turn himself into a hero with some no nonsense social media comments and a frank exchange with Sky Sports reporter Pete Graves, how long do you think it would take them to land on Michael Chopra? Probably quite a while. The Toon academy graduate perhaps isn’t remembered as fondly as other local lads who have risen through the ranks – a spell at Sunderland helped ensure that – but after his latest intervention on Twitter, his reputation might just have been restored somewhat. The ex-striker wasted no time in calling out Graves when he defended Shola Ameobi and John Carver for recent comments that some fans deemed to be supportive of Mike Ashley’s regime and the decision to try and bring in Steve Bruce as manager. But Chopra was having none of it, and compared the Sheffield Wednesday manager to the likes of Jose Mourinho and Claudio Ranieri, suggesting that unlike those figures, he would just be a yes man for the controversial owner. He said what a lot of fans have been thinking, and in a time when they feel massively underrepresented, that is always going to sit well with the Toon Army. 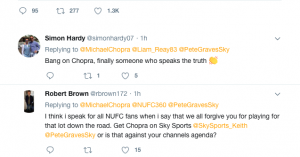