Yedlin may exit this summer

Newcastle United defender DeAndre Yedlin could explore his options this summer and potentially exit the club, according to CBS journalist Roger Gonzalez.

The journalist shared, via his personal Twitter account, that with the mess going on at the Magpies, don’t be shocked to see the 25-year-old right-back explore his options.

Gonzalez then claimed there were clubs keen on acquiring Yedlin’s signature as there were teams from Germany, Spain, Italy and France interested in him. 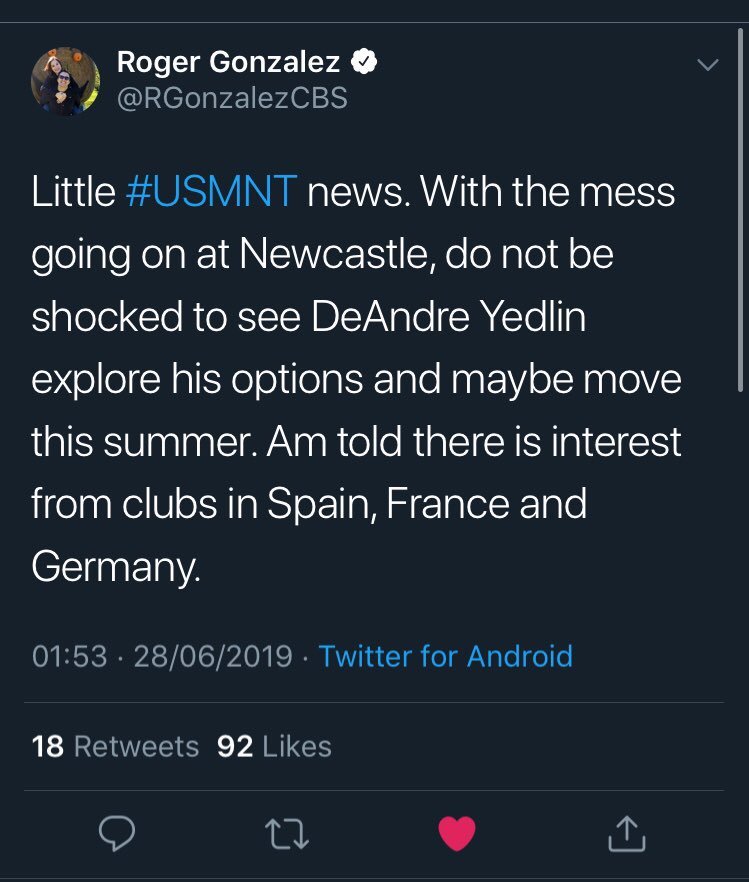 “Little #USMNT news. With the mess going on at Newcastle, do not be shocked to see DeAndre Yedlin explore his options and maybe move this summer. Am told there is interest from clubs in Spain, France and Germany,” wrote the journalist.

These stories are going to keep emerging about players potentially wanting out, until the club appoints someone to succeed Rafa Benitez at St James Park. After all, how can a player not consider their future when they don’t know who is going to be in charge of them in the upcoming season. Yedlin, who earns £30,000-a-week (Source: Spotrac) would be a noticeable loss if he chooses to force an exit and depart, given how regularly he featured in his latest campaign. The 25-year-old played 29 times in the Premier League in his 2018/19, starting 74% of the Magpies’ league clashes, and contributed one goal as well as one assist to the cause. While Yedlin didn’t have the most amazing season, he only helped the Magpies rack up five clean sheets and won a disappointing 59% of his tackles, given the situation going on at St James Park, if he left there’s no guarantee a decent replacement would arrive (Source: Premier League). Yedlin has proven that his blistering pace can be useful on occasion, as he has regularly surged forward to whip in crosses; the only issue is that out of the 77 crosses he made in his latest campaign, only 23% found their man. However, it’s fair to say that having Yedlin to call upon is better than having to utilise the other right-backs at the club.