Newcastle United supporters have taken to Twitter to react to the latest report that the club have been offered the opportunity to sign Marseille midfielder Morgan Sanson this summer, according to Sky Sports. Sanson would be an ideal addition for the Magpies this summer, as some Newcastle fans have suggested, with the Magpies set to lose midfielder Mo Diame at the end of his contract and doubts over the futures of Isaac Hayden and Jonjo Shelvey. However, the Sky Sports report suggests that Newcastle might have to pay around £31.1million for Sanson to secure  a deal, and the club’s fans are probably rightly doubtful that the current owners would be willing to invest that sort of money into the signing of just a single player this summer. Newcastle are set to face competition from both Wolves and West Ham, and it is more likely at the moment that the 24-year-old would end up at either of those two clubs instead of Newcastle this summer. Also with doubts over the future of Rafa Benitez the club are probably not in a strong position to convince a player in demand that they are the most stable option when it comes to a permanent deal.

Nothing But Newcastle rounded up some of the best Tweets bellow: 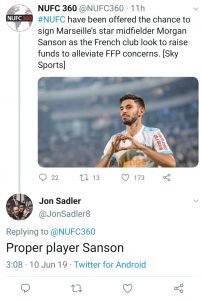 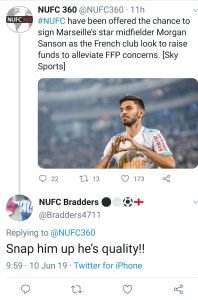 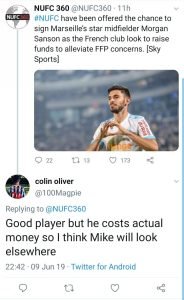 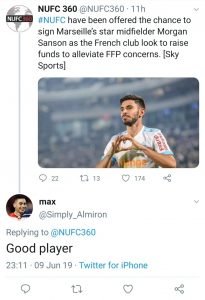 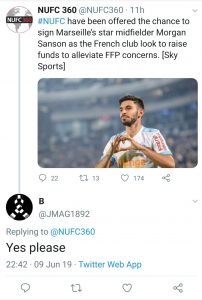 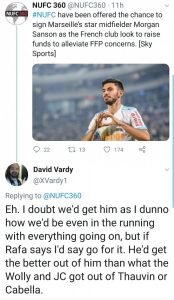 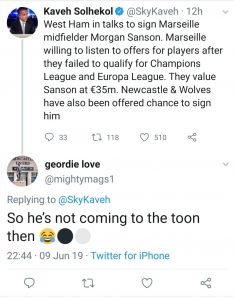