The early signs were looking positive for Newcastle United in the transfer window, with the club being linked with moves for both Salomon Rondon and Ryan Fraser.

These rumours were then made background noise after it was revealed that the Bin Zayed Group had agreed to buy the Magpies for a reported figure of £350million.

But a month after these reports, not much has changed at St James’ Park, with no transfers confirmed and rumours drying up on any potential deals as the days go on.

Newcastle were reported to have held an interest in Bournemouth winger Fraser in April, and have recently been joined by Arsenal, who are also keen on the Scotland international.

Bournemouth have been reported to have placed a £25million price tag on Fraser by the Daily Mail, and Newcastle should use this as an invitation to secure Fraser this summer for a steal.

The 25-year-old would be a great addition to Rafael Benitez’ squad in the North East after he enjoyed his best-ever season in the Premier League in the last campaign.

When looking at his attacking stats compared to Ayoze Perez via WhoScored, Fraser impresses despite the fact he plays in a much wider role compared to the Spaniard.

The standout stat is his assist tally, Fraser delivered an impressive 14 assists last season – only bettered by Eden Hazard, and 12 more than Perez. These came from 2.4 key passes a game – double that of Perez.

Fraser also takes better care of the ball when running at the defenders, with his great pace making it easy for him to glide past his opposing number. The Bournemouth flyer was dispossessed 0.7 times on average per game, with Perez losing possession more than two times per game.

We have no doubt that for £25million, a move for Fraser would be a bargain for the Magpies. The only potential issue is that Benitez has favoured wing-backs over wingers last season, with a change of system most likely needed to fit the 5’3″ attacker into his side. [Transfermarkt]

Despite lacking in his defensive capabilities, when compared to Newcastle’s current wing-back Matt Ritchie, Fraser easily outperforms him in terms of passing averages. 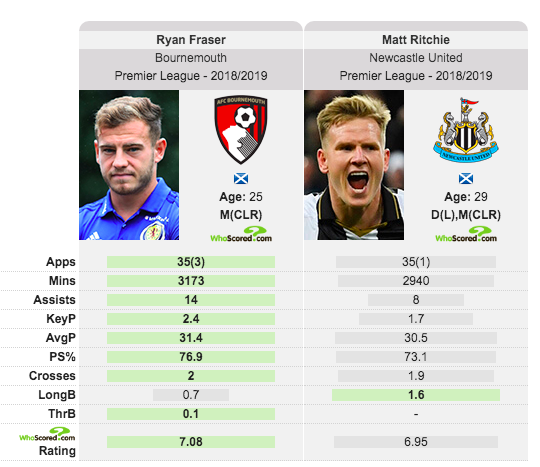 At a reported £25million, Newcastle must reignite their earlier interest in Fraser, who could easily become a star at St James’ Park under the guidance of Benitez. At 25 there are no issues over age. The only problem is that he’s only got a year left on his contract and clubs could get him for free next summer.