Newcastle miss out on Targett

One of the more positive things left behind in Rafael Benitez’ reign at Newcastle United was his defensive system in the Premier League.

The Spaniard adapted to a five-at-the-back formation, which saw his team gradually rise up the league after a dreadful start which saw the Magpies pick up zero wins in their first 10 games.

It was a skeptical decision at first, which saw the more attacking Matt Ritchie slot in at left-wing-back, a position he made his own through his grit and determination on and off the ball.

On Saturday it was reported that the Magpies held an interest in Southampton full-back Matt Targett, only for them to miss out after Aston Villa agreed an initial £14million deal for his services.

No need to worry for Newcastle fans, who can breathe a sigh of relief, with Ritchie much better suited to the wing-back role, should Benitez’ successor keep the system.

Comparing the two wing-backs together via WhoScored, it was the Scotsman that made the bigger impact over the last season 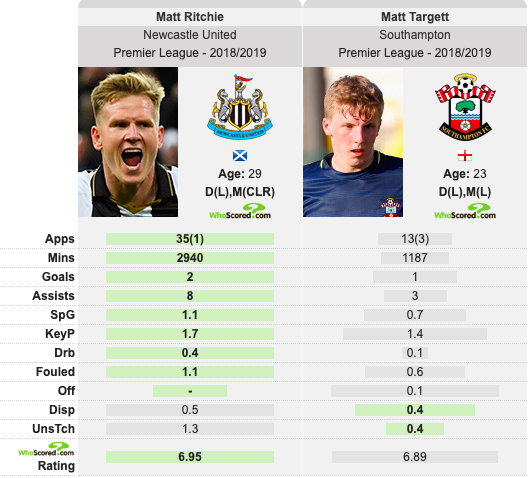 In modern day football, it is vital for any team in attack that their full backs are as capable on the ball as they are off it. The 29-year-old is streets ahead of Targett once in possession, averaging more shots and key passes during games. This is highlighted more when you see that Ritchie delivered five more assists in the Premier League.

Targett also underperformed when attempting to launch attacks for his side, with the £35,000 per-week ace [Spotrac] only managing to average a pass success rate of 69.9%. 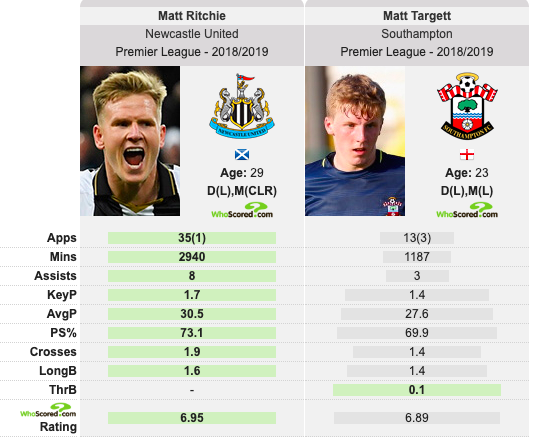 Not only did Targett struggle, but he was also blown away by Ritchie, who averaged more passes per game as well as more crosses and long balls attempted.

Missing out on a transfer target is never easy, but when you already have options better than that at the club – the £14million is much safer being kept in the bank.