At the moment, you cannot really blame Newcastle United fans for the general feeling of apathy that seems to have settled on Tyneside. After months of uncertainty, their worst fears were finally realised earlier this week when it was confirmed by the club that Rafa Benitez would to be staying at St. James’ Park. That revelation has been felt like a hammer blow amongst supporters, but as the dust begins to settle, the reality of the situation is that a replacement must be found for the popular Spaniard. But that might not be as easy as it first appears. Any manager worth his salt would surely look at the Newcastle job and realise it is a poisoned chalice. With little to no backing, and with humungous boots to fill, it truly is a thankless task. One of the latest names to be bandied about is that of Claudio Ranieri. According to Sky Sports reporter Keith Downie, the Italian is in the running for the Toon role, but fans don’t seem best pleased by the prospect. Obviously, the Tinkerman has near legendary status in England for what he achieved with Leicester City, but beyond that, his record has been less than flattering, and a points per game of just 0.71 with Fulham last season [Transfermarkt] is enough of a red flag for the Geordies to surely realise that the Italian would not be a good idea. 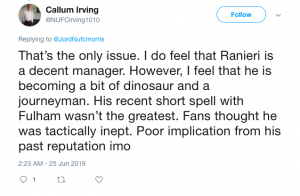 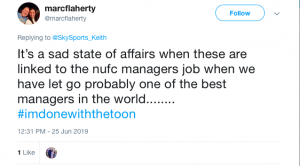