It’s important to realise that just because a betting company slash the odds of a move, managerial or otherwise, happening, it doesn’t mean that said move is actually going to come off. Most of the time, sudden changes in the market are powered through a kind of mild hysteria, as a load of people buy into a rumour and pile their cash in on the latest whisper they have heard on the grapevine. That doesn’t stop fans from talking though, and that has proven to be the case with Newcastle United and their apparent interest in Roberto Martinez. As reported by the Shields Gazette, the Spaniard has been installed as favourite to land the vacant manager’s job on Tyneside, but many supporters aren’t too happy. Whether that is because they don’t believe he is the right man for the job, or whether they are chastising him simply because he isn’t Rafa Benitez is hard to say, but certainly, the Magpies could do a whole lot worse than Martinez. The 45-year-old had a points per game average of 1.56 during his last spell in the Premier League at Everton [Transfermarkt], and since then his reputation has skyrocketed after he guided Belgium all the way to a World Cup semi-final. The Magpies may not fancy him, but honestly, they probably should. 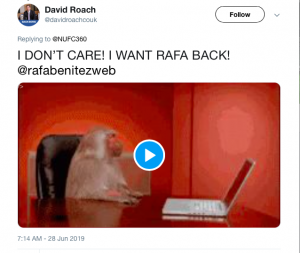