You have to wonder how much more Newcastle United fans can take at this point. The Magpies have begun to look less and less like a football club in recent weeks, and more and more like a social experiment on the effects of mass exposure to inhumane levels of frustration. With Rafa Benitez leaving in Sunday, and with the Bin Zayed Group’s proposed takeover showing about as much life as a shopping trolley at the bottom of the Tyne, things are looking pretty glum in the north east. But, as the Toon Army will tell you only too readily, things can always get worse. And that would certainly be the case if Manchester United get their way and complete a deal for Sean Longstaff. According to Football Insider, the Reds are willing to offer the young midfielder a £60,000-a-week contract at Old Trafford, with the bidding starting at £18 million. It’s fair to say that the prospect has left many Geordies fuming, and it’s easy to see why. He might only have made 12 senior appearances last season, but his pass completion rate of 80.9%, plus his 3.3 long balls, and the fact that he was only dispossessed 0.7 times per game [Whoscored] show that he has the potential to be an ideal, well-rounded midfield general for whoever he represents. The Toon Army will realise that hanging on to him forever will be nigh on impossible, but they will want to get at least another year or two out of their newest homegrown hero before he flies the nest. 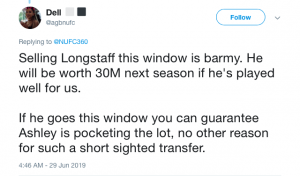 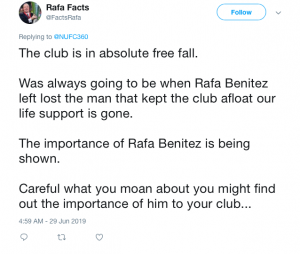