Dwight Gayle was part of one of the most influential swap deals of the last campaign. With the Magpies forward moving to West Brom, the Baggies sanctioned a loan move for Salomon Rondon to go the other way to St James’ Park. The 28-year-old enjoyed an incredible season in the Championship, scoring 24 goals from an average of 2.4 shots per game at the Hawthorns. [WhoScored] Gayle joined Newcastle in 2016 from Crystal Palace for £10.6million and has made 71 appearances for the North East club, scoring 29 goals in the process – the most for any single club in his career. The striker has been linked with another move to the Championship this week, the Chronicle reporting that Stoke are interested in his services. It has been claimed that Newcastle have told Stoke that £20million will be enough to bring in the striker. Gayle has proved his worth as an outstanding Championship striker in his career and Newcastle would surely be interested in allowing him to leave should such an offer come in. Many Newcastle fans seemed to agree when reacting to the news on Twitter, with one fan claiming they would “snap their hands off” for such a deal.

NothingbutNewcastle picked out some of the best responses below: 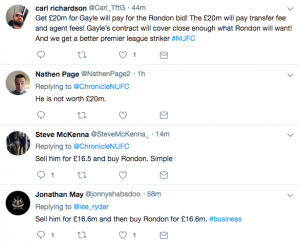 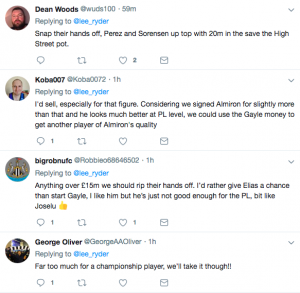