When hopes are as slim as they are on Tyneside at the moment, you have to look for positives wherever and whenever you can. Rafa Benitez’s contract expires next Sunday, and as of yet, there is no suggestion that he will reach an agreement with Newcastle United over a new one. In fact, a report from the Daily Mail even goes as far as to suggest that his departure is all but guaranteed, and that there is very little hope of negotiations between manager and club reopening. If that is the case then Benitez’s deadline will come and go with minimal fanfare and the Magpies will have to begin the process of finding a replacement. That will be a thankless task, no doubt, and it’s one that fans don’t even want to consider. In retaliation to the miserable events at St. James’ Park at the moment, respected fan account NUFC360 have set up a “Rafa Benitez Appreciation Week”, in which they plan to show their love for the Spaniard, regardless of if he stays or goes. At the moment, you’re inclined to believe it will be the latter, but who knows, with one last voice, push from the fans, maybe the scales will finally tip in their favour. 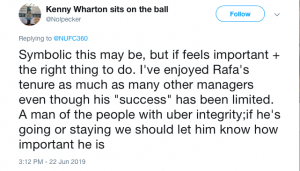 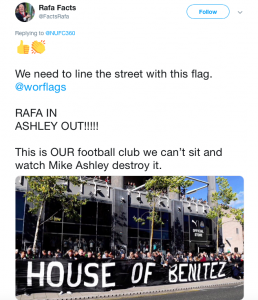 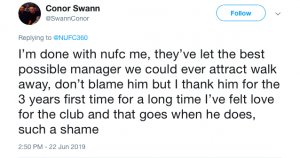