Harper: Vieira would be perfect for Newcastle

Harper believes he’d be terrific: “He was a very quiet guy, but he let his football do his talking on the pitch, and he was definitely a leader and fantastic player for Arsenal throughout his career,” he told Love Sport Radio.

“He’s just a fantastic leader and a fantastic guy. A really nice guy, who has so much experience in the Premier League that you couldn’t see why it wouldn’t work for him at somewhere like Newcastle if he went there and give it a go.” 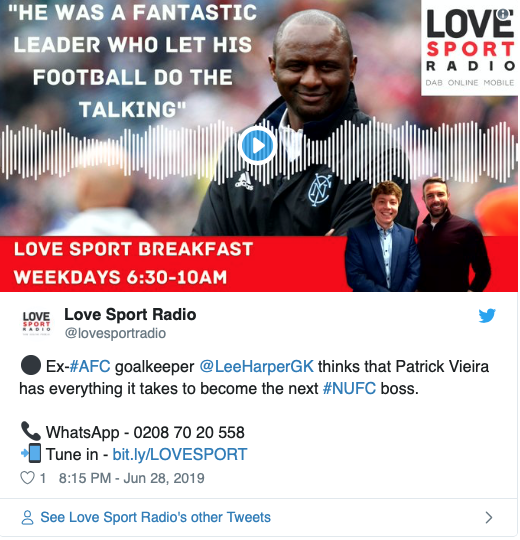 The big hang-up with Vieira, of course, is that he hasn’t managed in the Premier League. However, that’s been the case with many of the bosses Newcastle have been linked with since Rafael Benitez’s departure was confirmed on Monday. Vieira obviously has a phenomenal reputation from when he was a player. He was the undoubted leader of the Arsenal side who went toe-to-toe with Manchester United during the early noughts, as well as being the captain of the famous Gunners’ ‘Invincibles’ side. His career in management hasn’t gone too badly either so far. He did admirably with New York City in Major League Soccer, while he has made a pretty decent transition to European management with Nice, as well. However, he is currently employed and that’s where the trouble is for Newcastle. Mike Ashley is surely unlikely to pay the compensation required to secure an in-work manager, which likely rules the Frenchman out.