Edwards: Rafa exit not because of takeover bid

Rafa Benitez did not leave Newcastle United because a prospective buyer wanted him to, according to the Telegraph journalist Luke Edwards.

The Spaniard’s contract on Tyneside expires today, and a report from the Mirror suggests that Toon owner Mike Ashley has spoken out on the matter, claiming that potential buyer Sheikh Khaled does not want Benitez at the club.

But Edwards has sought to refute these claims.

Writing on his personal Twitter, he said: “A few confusing claims this morning regarding Benitez and Newcastle. There is no exclusivity so no potential bidder would be able to say who they wanted as manager.

“At least one of the groups wanted Benitez to stay.

“Rafa was asked to wait and see what happened with takeover but didn’t believe it was going to happen as he had heard so many takeover claims in his three and a half years at SJP. Like the rest of us.” 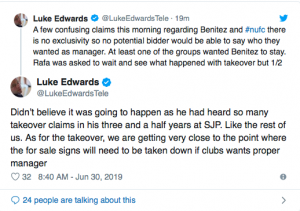 If Edwards is right on this one – and there are few people who know what is happening at Newcastle better than him – then this is a new low for Mike Ashley. Even by his standards, which, if we’re being honest, are pretty poor, this is a blatant piece of misguidance. As Edwards rightly states, where is the logic in granting the wishes of a potential buyer when you haven’t even granted them exclusivity? What if that deal falls through and you’re left in the position you were in before, except without the world class manager to pull you out of the mud year after year? It’s a ridiculous notion, and it just goes to show how far past the point of caring the controversial owner is. To make such an assertion, knowing full well that it will probably be ripped apart by journalists and fans alike, exhibits a level of apathy and disrespect for the club that exceeds anything he has shown before. Once again, Ashley has shown his true colours.