Colback must not be given second chance

Despite making 178 Premier League appearances throughout his career, the 29-year-old has never really grasped that opportunity and only featured in relegation battles.

The former Sunderland midfielder has only ever made an impact at St James’ Park once the Magpies were relegated to the second tier four years ago.

Once promotion was secured, Colback’s career at Newcastle seemed to evaporate as it was followed with two loan-spells at Nottingham Forest.

The Chronicle suggested on their live blog (28/06, 15:07 pm) that Martin O’Neill’s recent sacking at the City Ground could lead to Colback being given another chance in the Premier League next season – this cannot be the case, with whoever taking charge of Newcastle next surely making it their priority to close any potential route back into the club.

It was suggested on the blog that Colback could be available for just £1million this summer, as Rafael Benitez was prepared to ditch the midfield man.

Comparing Colback to the man who has covered his holding midfield spot to great effect, Issac Hayden, via Who Scored, you can see the difference made by the 24-year-old. 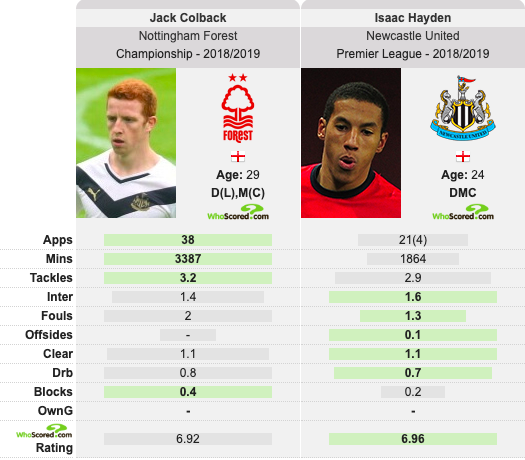 Hayden made a significant difference at St James’ Park, averaging more interceptions, clearances and a higher match rating than the Forest loanee.

This all but proves that Colback has no chance of a return to the North East club, who must use these stats to realise how pointless it would be for him to stay at the club next season.

The £35,000 per-week midfielder [Spotrac] must pack his bags and wait for the phone to ring elsewhere, with Newcastle surely readying the chopping block for a summer move.