BZG do not have exclusivity

They say it’s the hope that kills you. If Newcastle United had gone into this summer knowing that Rafa Benitez was on his way out the door and that Mike Ashley was sticking around for the foreseeable future, maybe they could have gotten their heads around things sooner and just about swallowed the bitterest of pills. Instead, the Spaniard’s contract situation was allowed to rumble on until the eleventh hour before it was confirmed that he was leaving, and the sudden and unexpected prospect of a Middle Eastern takeover was dangled in front of them like an oasis in a desert of toxic ownership. Increasingly, there has been a creeping suspicion that all was not as cut and dry as the Bin Zayed Group had initially made it out to be, and after weeks of speculation, that fear has been seemingly realised by the latest report from PA Sport, as quoted by the Chronicle (12.51). In it, PA Sport suggest that the BZG do not have exclusivity, and that they have not started to meet the Premier League’s requirements to prove they are fit to purchase the Magpies. Basically, they are not anywhere near as close as they said they were, and it’s fair to say that the Toon faithful are not best pleased. 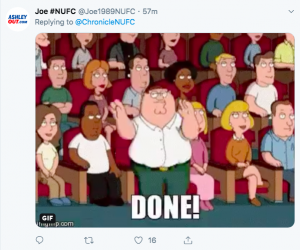