Almeida move off the cards

The last thing on the agenda right now at Newcastle appears to be any potential transfer business.

To be more specific with that, there seem to be no imminent arrivals at St James’ Park. On the opposite side of that, the potential of a number of outgoings appears to rise as the days go by.

Sean Longstaff is the center of strong interest from Manchester United, whereas Ayoze Perez is attracting a number of European clubs.

A report on Friday suggested that DeAndre Yedlin could also look for a move away from the club this summer amid interest. That would leave a significant gap on the right-hand side of defence, with Javier Manquillo the only other option.

Benfica defender Andre Almeida attracted interest from the Magpies earlier in the window – but that move now looks dead in the water after O Jogo reported that the 28-year-old is in fresh contract talks.

The days where Newcastle fans can read positive reports are long in the past right now.

Almeida would have brought great experience to the North East, after being near ever-present for the Portuguese champions last season.

Looking at his defensive stats compared to Javier Manquillo via WhoScored, he achieved a much higher average match rating than the Spaniard (7.37) – even playing significantly more games. 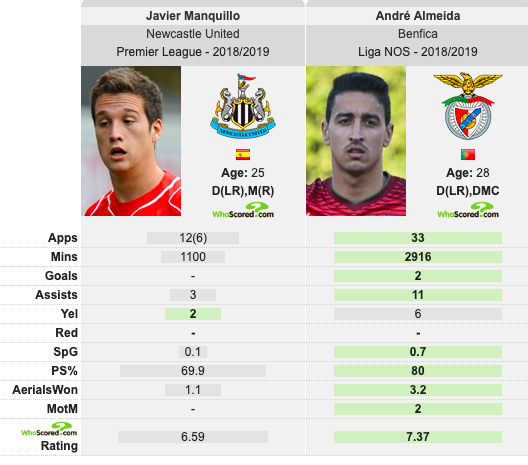 Almeida would have taken control of the right-back position no questions asked, having delivered eight more assists alongside a better average in terms of aerial battles won plus passing success per game.

With a reported fresh contract offer on the table, Newcastle’s chances of signing the 28-year-old look slim to none, and they must now look elsewhere.

The hunt for reinforcements will now continue, with the ongoing matter of who will take charge of the club surely taking priority right now.