Kenedy returns to Chelsea after Newcastle turn down permanent option 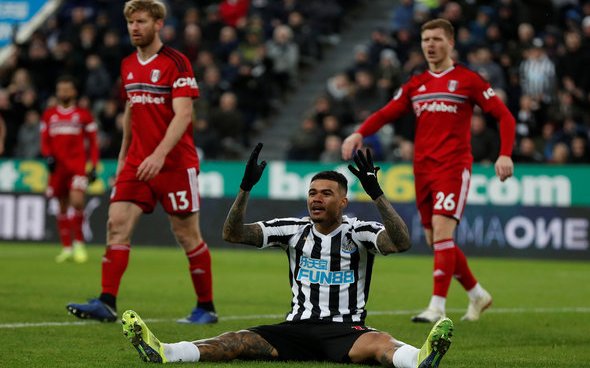 On-loan Newcastle United winger Kenedy has returned to parent club Chelsea after the Magpies turned down the permanent option in his deal, according to The Sun.

The newspaper claims that Rafael Benitez’s side had the option to bring in the 23-year-old on a full-time basis, if they handed over the eye-watering sum of £30million.

However, the club turned down that option after a hugely disappointing season from the speedy winger, and he has now returned to Stamford Bridge.

The Brazilian has just 12 months remaining on his Blues contract, but it’s unlikely that Chelsea will get anywhere near £30million if they opt to sell him this summer.

This was an absolute no-brainer from Newcastle. Why on earth would you spend £30million on someone who can’t even regularly get in your team? Kenedy was a huge disappointment this season, having made a big impact in the back end of the last campaign. He arrived back on Tyneside with big expectations and he completely underwhelmed. He’s got talent, there’s no doubt about that, but he never seemed able to get things going this term. With that said, the Magpies were never going to hand over £30million for him. Under Mike Ashley’s stewardship it’s unlikely that the club would have exercised their option even if Kenedy replicated what he did last season. After he proved such a flop it’s no surprise at all that Newcastle have said ‘thanks, but no thanks’ to the speedy Brazilian. It’s best for everyone that they all move on. Kenedy needs a fresh start, but that’s not going to be at St James’ Park.