Alan Shearer has surely encapsulated how most Newcastle United supporters will be feeling towards the club’s transfer policy, after their net spend since 2016 was compared with the other teams in this season’s Premier League.

Newcastle finally broke their club record transfer this season, for the first time since buying Michael Owen from Real Madrid in 2005, by signing Miguel Almiron in the January transfer window, but the club’s net spend since 2016 is still the second lowest in the Premier League this season.

Shearer took to his personal Twitter account with a cryptic posting including just two eye emojis, in response to a Tweet from the Premier League Panel, which compared the net spend of every Premier League team since 2016, and had Newcastle placed second from bottom with just £4million spent in the last three years. 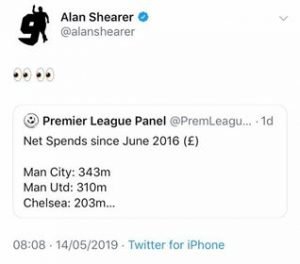 Shearer’s tweet sums up how Newcastle supporters will feel about way in which the club’s board have operated in the transfer market in recent years.

Newcastle have the second lowest net spend of any Premier League club this season over the last three years, which is one of the reasons the Magpies may struggle to keep hold of manager Rafa Benitez beyond the summer.

Benitez will be wanting the club’s owner Mike Ashley and the his board to release more funds for him to strengthen his squad if he is going to be convinced remain in charge at St James’ Park.

However, given Newcastle’s net spend is just £4million over the last three years it is difficult to see their approach changing dramatically this summer, which could mean that the Magpies see Benitez walk away from the club.

Shearer, like most Newcastle fans, will be hoping that the club improve their levels of investment in the first team squad ahead of next season, if they do they will have a chance of keeping Benitez and giving the Spaniard an opportunity to have them challenging for a regular top half finish.