Townsend may be a danger man on Sat 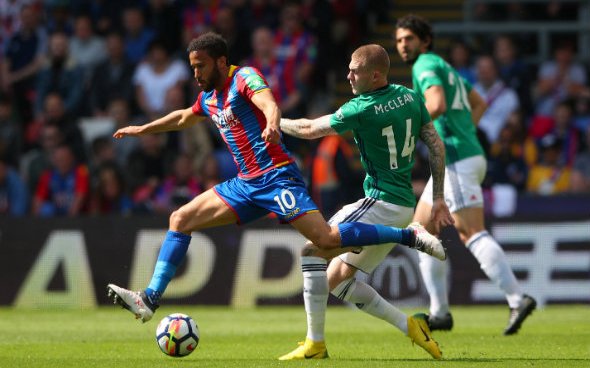 Newcastle United must sweat about facing Crystal Palace winger Andros Townsend on Saturday as he may play like a man on mission after his recently reported frustration.

The Daily Mail previously reported that the 27-year-old winger missed out on his dream to start for Palace against Tottenham in Spurs’ next stadium due to injuring his hand.

The newspaper reported that Townsend had hurt his hand as he punched the home dugout during Palace’s 2-0 victory over Huddersfield Town after being frustrated with himself for missing two-clear cut chances.

While Townsend ended up featuring at Spurs’ new stadium by coming off the bench for Palace in the 80th minute, missing out on starting that clash no doubt only added to his recent frustration.

Palace manager Roy Hodgson confirmed on Friday that the winger was fit enough to start the clash with the Magpies following his injury as the only played ruled out of the game for the London club was Mamadou Sakho.

“We’re ok, the same as before. It’s only Mama Sakho who is out. We have a full squad to choose from,” said the Palace boss, as quoted by Football.London.

The Magpies know how dangerous of a player Townsend can be on his day from his time wearing the black and whites stripes, and will no doubt be concerned that the player’s frustration will make him a danger on Saturday.

The 27-year-old is able to carve through his opponents due to his dribbling skills and is more than capable of getting on the score sheet for his side by unleashing a powerful shot from distance.

Given this skill set, Townsend is one of those players who can shine even when he side struggles and that means the Magpies have to be wary of facing him, especially if he feels he has point to prove.

Hopefully Rafa Benitez has a plan in place to tame the Palace winger as it may be crucial to have one on Saturday.