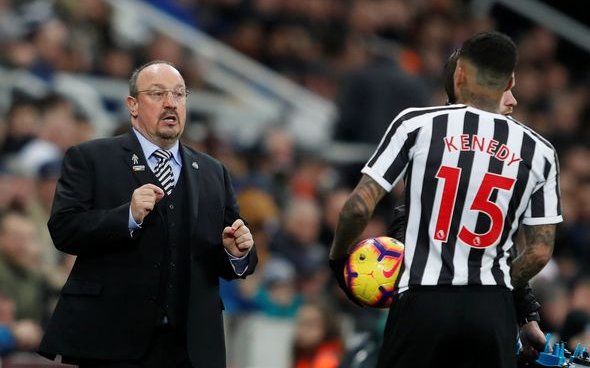 Kenedy has definitely had a season to forget at Newcastle United this time around, hasn’t he?

The 23-year-old has been thoroughly underwhelming in the matches that he has played in recently, and he even failed to make the squad for the 1-0 defeat of Crystal Palace on Saturday, so it is no doubt that he has failed to impress Rafa Benitez in training.

He is a far cry from the player that wowed the Newcastle crowds last season, and the likelihood of him returning to Chelsea is higher than it has ever been. The Chronicle claim that United have been searching for wingers like Kenedy across Europe rather than pursue a permanent deal for the Spaniard.

This is not surprising in the slightest, as he has been rather dreadful so far this season.

One thing is for sure though, the Newcastle fans will be jumping for joy that the club are not set to sign him on a permanent basis. The last thing they needed was for them to waste their money on someone who has been hugely ineffective all season, bar a couple of games.

He has only scored one goal as well as provide one assist this season, which is an atrocious statistic for someone who largely operates as a winger.

They are much better off using their money wisely and finding someone who actually makes a real impact rather than place their faith in a player who is not going to give it back.

Newcastle fans no doubt want him gone as soon as the summer transfer window opens, and to be honest, you cannot really blame them. His £25,000-a-week [Spotrac] are just going down the drain, and have been for most of the season.