Newcastle fans over the moon with Hayden display v Palace 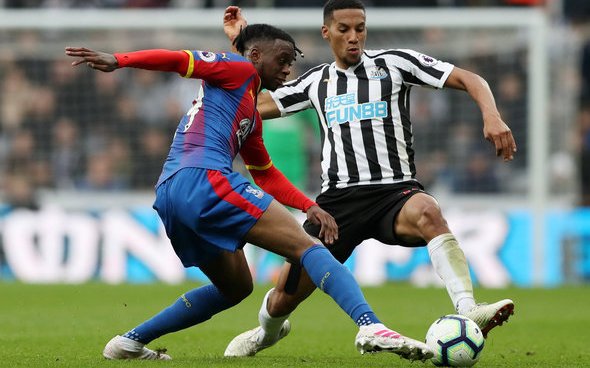 If you had told Newcastle United fans last summer that Isaac Hayden would be one of their top performers at this stage of the season they would have had a good chuckle at you. Not only was the midfielder down the pecking order at St James’ Park, the likes of Jonjo Shelvey and Mo Diame ahead of him in Rafael Benitez’s eyes, but he was also looking to seal an exit back down south for personal reasons. However, you can be sure that the Newcastle faithful are loving his performances now, with his display against Crystal Palace on Saturday afternoon standing out as one of the best on the St James’ Park turf. The 24-year-old’s energy, dynamism and never say die attitude saw him hassle and harass the visitors from London for the entire game and demonstrates why he now looks to be an undroppable member of this starting XI. The Newcastle supporters were over the moon and you can be sure that manager Benitez was too – the only worry is how they replace him when he does eventually leave the club.

Nothing But Newcastle has gathered a selection of the supporters’ tweets:

Whys everyone crying for Shelvey? KI and Hayden have been fantastic #NUFC

What a first half, Schär is VITAL to how we play. Perez been superb and Hayden has been phenomenal #NUFC

Half decent first half from #NUFC, Hayden the pick for me – a different player these days. Almiron has been quality as well.

Hayden is Gunna end up killing someone in this game. Man of the match so far, constant pressure #NUFC #NEWCRY

Hayden having another stormer so far. #NUFC

Isaac Hayden has been an absolute beast in the first half for #NUFC. Will be a big loss for us when he leaves in the summer… pic.twitter.com/BpLjYo6gKV

Hayden has been quite the player so far. Nailing every tackle. #NUFC

Isaac Hayden has had a brilliant game so far – winning everything and composed with his passing. #NUFC