Newcastle fans should be fuming if Woodman is replaced 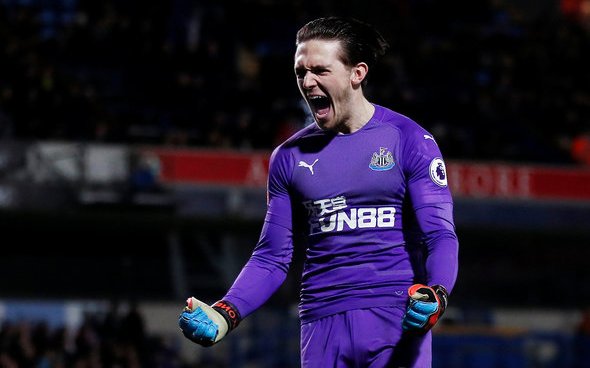 When it comes to Newcastle United’s goalkeepers, there is only one name on the minds of fans, not to mention manager Rafael Benitez.

That of course is star shot stopper Martin Dubravka, who has stolen the hearts of the Toon Army in his year and a half stay at St James’ Park.

Confident, commanding composed and with expert communication in his box, the 2018 January signing has been an inspired capture, taking the Magpies’ quality between the sticks to the next level.

His form has seen Karl Darlow and Rob Elliot relegated to back up options while Freddie Woodman remains a hot prospect rather than an actual first team option for Benitez.

However, it could be all change behind Dubravka in the pecking order this summer, with chief Newcastle reporter for the Chronicle Lee Ryder tipping the Magpies to make a swoop for a new shot stopper this summer in the newspaper’s live blog (14:25).

It is stated that Woodman, Darlow and Elliot all have huge question marks hanging over their heads and as such could be shipped out to be replaced – but the Newcastle faithful should be fuming if it is the former of the trio who departs.

The 22-year-old might be the least experienced but it is his potential that the Magpies should look towards, with years to grow and develop into one of the best English keepers out there.

Dubravka is clearly number one between the sticks right now and no one who comes in is going to knock him from his lofty position in the Newcastle pecking order – they will instead have to be happy to sit as back up and therefore likely to be a young goalkeeper.

Why sign a promising shot stopper when you have one of the best already on your books? All it takes is the promise of replacing Dubravka for the cups and a shot at a regular spot in the future and Woodman could well commit to a long term future – after all, he is not going to be playing much elsewhere either.

Losing Woodman only to replace him with a similar talent is a waste of time, money and talent and the Magpies faithful should be fuming if he is the one to be sold this summer.