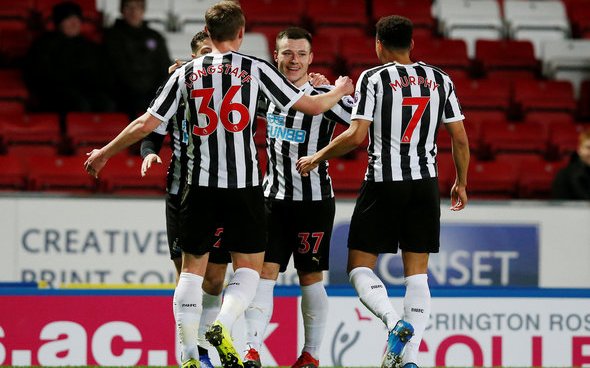 Newcastle United attacker Cal Roberts is set to join Colchester United on loan in the next 24 hours, according to Daily Mail journalist Craig Hope.

Hope, who is the North East correspondent for the newspaper, reports on his personal Twitter account that the 21-year-old will join the League Two side on a temporary deal.

Understand NUFC's Callum Roberts will join Colchester United on loan in the next 24 hours.

This looks to be a good move for all parties, with Roberts unlikely to get much first-team football on Tyneside between now and the end of the season. The 21-year-old winger did make a first-team appearance in recent weeks as he scored in a 4-2 win over Blackburn Rovers in the FA Cup, but with the Magpies now out of that competition, more matches at that level are unlikely to come for Roberts. The winger desperately needs to be playing senior football at this stage in career – he is still highly-rated at St. James’ Park but at 21 years old he is not particularly young anymore. A move to the fourth-tier may seem like a big step down, but it should guarantee that Roberts is heavily involved in the coming months, and ensure he returns to Tyneside a more mature player ready for another shot at the first-team in the summer.