Hayden will be sweating over Samaris U-turn 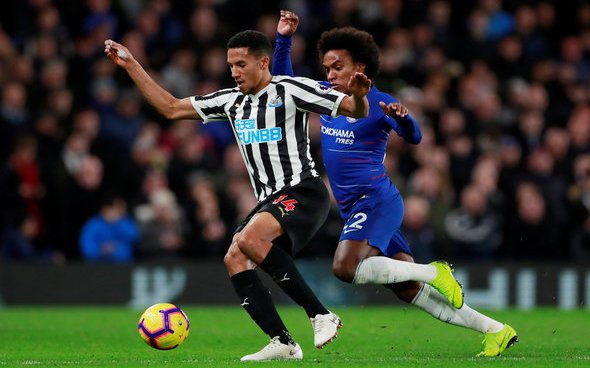 Newcastle look to be on the verge of two last-gasp January signings, with Miguel Almiron and Antonio Barreca both set to join the club on deadline day.

Paraguay international Almiron is set to arrive on a club-record deal from Atlanta United, while Italian left-back Barreca looks likely to pen a loan deal until the end of the season.

One player who had looked like he was set to join them in a move to Newcastle was Benfica midfielder Andreas Samaris, with the Magpies reported by O Jogo to have submitted a loan offer for the 29-year-old.

There looked to be few obstacles to such a deal taking place, with Samaris hardly playing for the Primeira Liga side all season, with his contract coming to an end this summer.

However, another Portuguese outlet has now reported that Benfica have tabled a counter offer to Samaris for him to remain in Lisbon, with the player keen on the idea of staying at the club [Desporto ao Minuto].

This is a real blow to Newcastle in their attempts to strengthen their midfield, but this update will come as a huge blow to one player in particular: Isaac Hayden.

The 23-year-old has made clear his desire to leave the club as soon as possible, with his family known to be unhappy with life in Newcastle.

However, any potential exit for Hayden was always going to depend on the Magpies finding a replacement to take his place in the squad.

Samaris looked well set to be that man, with the Greece international a like-for-like replacement for Hayden in the middle of the park, but this latest update puts his move in jeopardy.

That in turn endangers Hayden’s desired exit, and the 23-year-old will be sweating buckets as we head into deadline day as it looks more and more likely that he will have to remain on Tyneside for now.