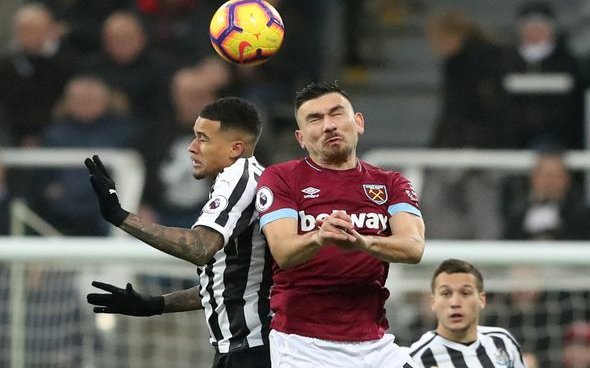 Paul Ince claimed that Newcastle United flyer Kenedy should not have been going head to head with West Ham attacker Robert Snodgrass on Saturday.

The Hammers won 3-0 at St James Park and the former Manchester United player tore apart the Magpies’ defending for the first goal they conceded.

Ince shared that the last thing you would want is for Kenedy to be marking Snodgrass and then slammed the player for playing right into his opponent’s strengths.

“First and foremost the last thing you want is Kenedy up against Snodgrass, you know what he wants to do, he’s on the right hand side, wants to cut back on his left foot so just keep your shape,” said the retired midfielder on BBC One’s Football Focus (Saturday December 1st, 15:17), as seen in a clip via their Twitter account.

“But Kenedy shows him the line and then he puts in the box and Schar and Fernandez are standing next to each other, give a ten foot gap to Chicharito and that’s food and drink all day to Chicharito all day long.”

Ince clearly thinks it was a mismatched battle between Kenedy and Snodgrass, and judging by how the first goal of the game came about, he seems justified in that opinion. Javier Hernandez was the benefactor of Snodgrass being able to whip in a beautiful cross and once it reached him, there wasn’t much the Magpies could do. Hopefully Kenedy learns from his experience on Saturday as if he comes across a player similar to Snodgrass, he’ll know what to do next time. While the former Man United player highlighted the battle between Snodgrass and Kenedy, the duel between Felipe Anderson and DeAndre Yedlin didn’t exactly go in the Magpies’ favour. Ince also opted to highlight Fabian Schar and Federico Fernandez’s part in Hernandez scoring and it’s easy to see why. The defensive duo clearly weren’t on the same wavelength in the 11th minute when that goal when in, but it’s worth noting but they did improve as the game went on despite the Hammers going on to win 3-0.