It just does not seem to be happening for Cenk Tosun at Everton, does it? It is rather easy to echo the sentiments of the Everton fans here as it is not like he has made any sort of impact on the team. Whenever he is on the pitch, he practically makes zero contribution and that simply is not good enough at a team like the Toffees. Like one fan remarked, it looks like the ‘end is near’ for the forward, and to be honest, this would not be surprising in the slightest. The best thing Everton can do is cash in on him while they can and use the funds to bring in a decent forward, for he is not offering what the team needs up front. Newcastle were hardly quaking in their boots at the prospect of facing Tosun, and it is not difficult to understand why after these tweets. One supporter commented on how the 27-year-old has not been able to adapt to Premier League football, and they are right. It could be a confidence thing but Marco Silva needs his side at their best at all times. Tosun is nowhere near where he should be.

Nothing but Newcastle has rounded up some of the best tweets below: 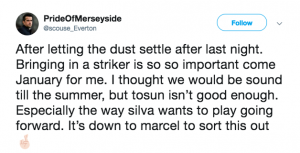