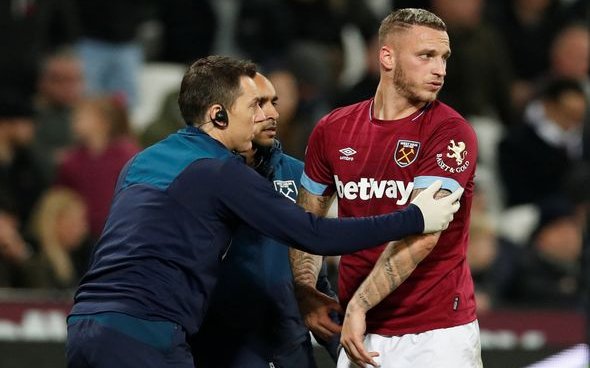 Newcastle United have won three games on the bounce in the league and have a very good chance of making it four if West Ham attacker Marko Arnautovic is ruled out for Saturday’s clash.

The Magpies are set to host Manuel Pellegrini’s side at St James Park in their next league game and known that the Hammers have a lot of players who can do them damage.

Rafa Benitez will be particularly wary of Arnautovic as the powerful forward is capable of scoring goals for fun when firing on all cylinders.

However it’s not yet known whether Pellegrini will have his star man to call upon as the attacker limped off during the Hammers’ 4-0 defeat to Manchester City on Saturday.

Arnautovic was deemed unable to play the final minutes of his side’s heavy defeat and left the Hammers with just 10-men on the pitch due to them using all their substitutes.

Despite the forward’s problem being enough to see him leave his side at a disadvantage at the weekend, Hammers news source Claret & Hugh reported on Tuesday that the London club weren’t concerned about the attacker.

The dedicated Hammers site claimed that West Ham were hopeful Arnautovic would make the trip to St James Park and the Magpies must wish that their opponents hope is misplaced.

The Magpies would have an easier task overcoming the London club if they didn’t have to worry about dealing with Arnautovic and would receive a boost before a ball was even kicked if he was ruled out.

Arnautovic is currently the Hammers’ leading goalscorer with five goals to his name and is head and shoulders above the club’s other attacking options.

This is especially the case at the moment as Claret & Hugh report suggest that the Hammers aren’t concerned about Arnautovic missing the clash due to Andy Carroll returning from injury.

Given that Carroll hasn’t played in the Premier League since May then there’s no way he’ll be at his best as he won’t be fully back up to speed following his recent spell on the sidelines.

Therefore this all means that the Magpies must wish the Hammers are misplaced to reportedly be hopeful that Arnautovic will play as it will be a boost to Benitez’s chances of keeping the winning streak alive.