Newcastle United are on a high after securing their first Premier League win of the season against Watford last time out.

They play host to Bournemouth at St James’ Park on Saturday as the Magpies look to continue their momentum with another positive result against the Cherries.

Eddie Howe’s team have started the campaign in terrific form, however, and will be smarting after throwing away their lead against Manchester United last Saturday.

Rafael Benitez, then, must carefully consider his team selection on Saturday, and it’s likely that the Spaniard will make just one change from the win over the Hornets.

Match winner Ayoze Perez, who scored the game’s only goal off the bench last weekend, will surely return in place of Yoshinori Muto, who went off injured.

Martin Dubravka is almost certain to start in between the sticks for Newcastle, while DeAndre Yedlin and Paul Dummett are firmly ensconced in the full back positions and will likely continue on Saturday.

Jamaal Lascelles, like Muto, went off with a knock against Watford. However, the Chronicle reports that the two players, as well as midfielder Jonjo Shelvey, are being assessed right up until the last minute ahead of the Bournemouth game.

The captain, if anywhere near fit, will surely start and looks set to continue his partnership with Federico Fernandez at the heart of the Newcastle defence.

A midfield four of Matt Ritchie, Shelvey, Mohamed Diame and Kenedy appears to be Benitez’s preference and, as long as the Englishman is passed fit, they all look set to start against the Cherries.

As mentioned, Perez, on a reported £45,000-per-week at the club [Source: Spotrac], will likely replace £10million man Yoshinori Muto. Salomon Rondon is almost certain to continue as the Magpies’ focal point. 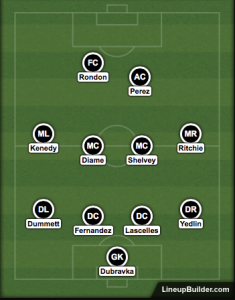