Newcastle United will face an extremely tough test when they welcome Bournemouth to St James’ Park on Saturday.

Eddie Howe’s side six sixth in the Premier League table after a remarkable start to the season, and will be looking to bounce back from a late defeat to Manchester United last time out.

The Magpies, on the other hand, are looking to make it back-to-back victories after beating Watford 1-0 last time out.

Despite the success of that game, or maybe because of it, manager Rafael Benitez would be wise to make a few changes for the Bournemouth clash, with three alterations sounding about right.

Fabian Schar, Ki Sung-yueng and Jacob Murphy should come in for Newcastle, with Jamaal Lascelles, Mohamed Diame and Kenedy missing out.

Martin Dubravka is an excellent shot-stopper and there’s no question that he should continue in goal, while DeAndre Yedlin and Paul Dummett have locked down the two full back positions.

Federico Fernandez is fully fit and should remain in his position in the middle of the Magpies defence. Lascelles, on the other hand, should miss out.

The captain came off with a knock against Watford and there’s simply no need to risk him in this game when his replacement against the Hornets, Fabian Schar, performed so well.

Matt Ritchie should continue on the right hand side of midfield, and Jonjo Shelvey, fitness permitting, should remain in the centre. Mohamed Diame has been poor all season and flopped again against Watford and should miss out after Ki’s excellent performance off the bench last time out.

Jacob Murphy, on a reported £25,000-per-week [Source: Spotrac], should be given another chance to impress in place of the disappointing Kenedy.

Up front, if Yoshinori Muto is fit he should continue despite Ayoze Perez netting against Watford, while Salomon Rondon will surely reprise his role as the team’s target man. 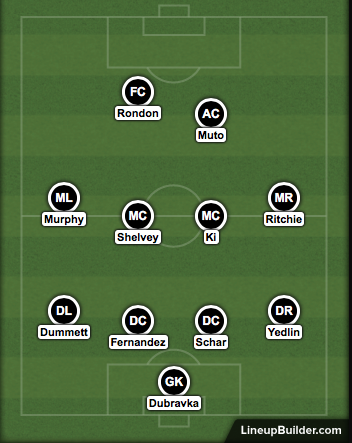