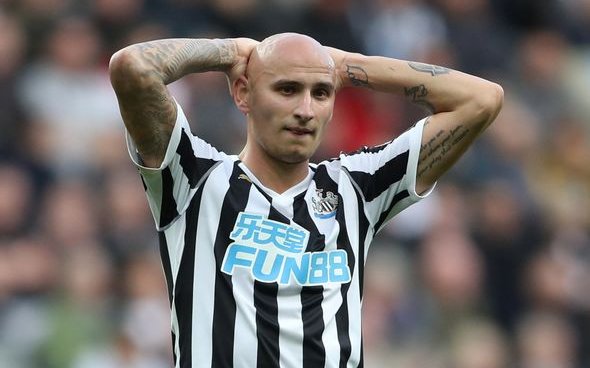 Newcastle United went into their showdown with Southampton at St Mary’s searching for their first win of the season and weren’t able to deliver.

The Magpies’ performance was far from inspiring as their attack was unable to click and make Rafa Benitez’s side look like a threat in front of goal.

Despite this the Magpies were still able to scrape a point from Saturday’s encounter as they drew 0-0 with the Saints thanks to a decent defensive performance on their part.

Nothing but Newcastle has identified three things supporters can take from the team’s most recent display against Southampton:

Yoshinori Muto has all the tools to be a danger in front of goal for the Magpies but he won’t become one at this rate. The forward’s teammates seem to determined to make it hard for the attacker to score by treating him like a giant target man. Muto regularly finds balls being played to him in the air and the majority of the time he is able to win the aerial duel he needs to, in order to make the ball his. However when it’s played into his feet, it’s a different story. The forward is able to skilfully move around his opponent and create a chance from nothing. If given the right service than Muto could be the sold-called forward that Benitez’s side apparently lack.

Diame has got to be axed

Mohamed Diame had a day to forget which ended with him limping off the pitch in the 76th minute. The midfielder seemed confused at his role and this saw it stuck between two minds on too many occasions. Diame is a better defensive presence than he is an attacking one, but that shouldn’t stop him attempting to create chances for his teammates like it currently does. The veteran midfielder has struggled all season and after another disappointing performance enough is enough.  Diame, who earns £45,000-a-week (Source: Spotrac), is clearly clueless about how to regain his good form from last season and needs to be axed for that reason. Benitez has kept the Magpies mainstay in his team for way too long now.

Rondon and Muto must be played together

Muto and Salomon Rondon only spent a grand total of 11 minutes on the pitch together and could have done with more time together. Both seem like they will compliment each other well and given that the Magpies failed to score in another Premier League game, Benitez needs to try to boost his side’s attacking threat any way he can. Given that Rondon can knock the ball down to Muto, who can then use his fancy footwork to charge at goal, then this two could have a very promising partnership that will leave Premier League defences scrambling. The Magpies are still yet to win this season and it seems these two attackers could be the answer to them finding their first win.