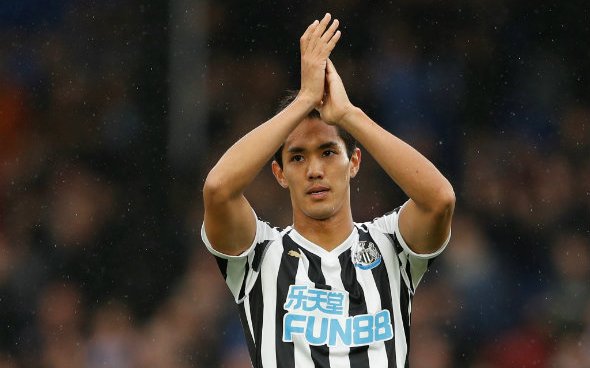 Newcastle United didn’t have the first half they would have liked against Southampton on Saturday as their opponents dictated play.

However even when the Magpies had the ball at their feet they didn’t play to their strengths of forward Yoshinori Muto in order to make their possession count and steal a goal against the run of play.

On a few occasions Muto’s teammate opted to boot the ball towards him, regularly putting it at a height in which he couldn’t win the battle with his marker for it or putting so much power on the pass, it was too much to handle.

The one time Muto had the ball played into his feet, which was in the opening five minutes of game, the summer recruit showed glimpses of what a threat he could be.

The 26-year-old went past his marker and was unlucky not to be able to put a better cross into the box once making space for himself.

It’s clear Muto could do damage to the Saints if the ball was regularly played into his feet as he has the trickery needed to carve out a chance.

Yet as it stands due to the Saints’ seemingly having more of the ball and the Magpies opted to treat Muto like he is a 6ft 5in target man, than the Japanese forward is being left stranded in his opponents half.

With Rafa Benitez having Joselu and Salomon Rondon on the bench then perhaps the Spanish manager needs to make a change if Muto’s teammates are going to remain oblivious to the forward’s strengths.

Given that Rondon and Joselu would be able to win the ball upfront and perhaps knock it down for Muto to fire home, then it could see the Japanese forward brought more into the game in the second half.