Benitez must return to drawing board after Hughes criticism hits home 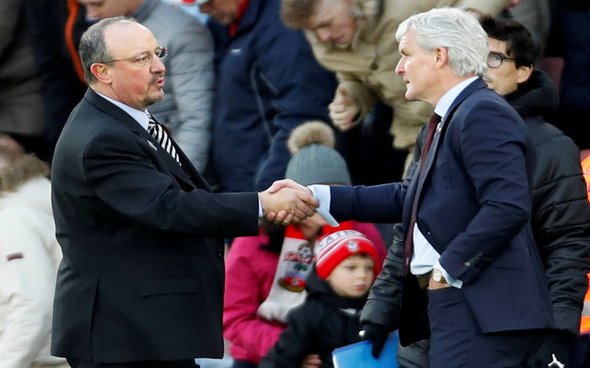 Newcastle United battled their way to a goalless draw with Southampton on Saturday as the team’s wait for a first Premier League victory of the season continued.

The Magpies were second best for large portions of the contest, and Rafael Benitez’s bizarre tactics once again contributed to a lacklustre performance at St Mary’s Stadium.

Benitez’s opposite number Mark Hughes was certainly less than impressed by the approach taken by Newcastle: “It was disappointing in respect of not getting what we deserved on the day,” he told the Chronicle at his post match press conference.

“Newcastle came here for a point. Every time we tried to press they were looking to knock balls behind us and trying to turn us round.

“We had to keep starting over. We stopped them on the halfway line and broke from high positions,” the Saints boss finished.

Normally those sorts of remarks would be viewed simply as sour grapes after a game that did not go the way Hughes wanted, but in this case he has a point.

Newcastle played worryingly negative football and, worse than that, they appeared to have no clue about what to do once they approached the home side’s goal.

As against Brighton & Hove Albion last time out the Magpies only real tactic going forward was to knock aimless crosses into the box and hope for the best.

It didn’t work against Brighton and it failed again against Hughes’s side, and only marginally began to make sense once target man Salomon Rondon came on in the second half.

Benitez needs to work on this on the training ground because this is two weeks in a row now where the Magpies have had no idea how to break the opposition down.

Hughes was spot on in his criticism of Newcastle and, deep down, Benitez will know it. The Spaniard has done a terrific job at St James’ Park, but he needs to prepare his team better otherwise he risks losing his post.