Benitez must prepare his side to face Aubameyang or Lacazette 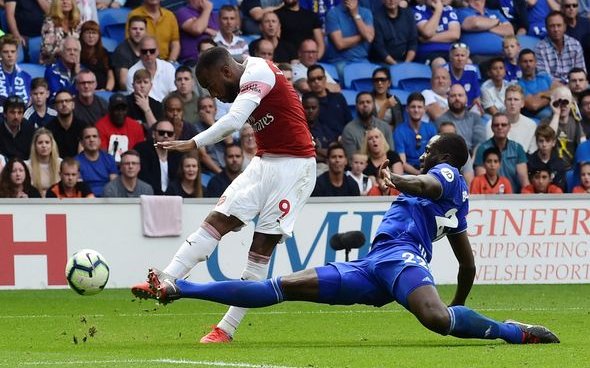 Rafa Benitez must have a plan ready to go if Unai Emery opts to play Alexandre Lacazette and Pierre-Emerick Aubameyang together as well as another just in case he sticks with keeping them apart.

The two Gunners hotshots were both on the scoresheet in the Gunners’ outing against Cardiff City ahead of the international break and were actually allowed to be on the pitch at the same time.

The pair both started the match against the Bluebirds and it was the first time in a while that the pair spent a significant amount time together on the pitch in a competitive game as normally it’s either one or the other that features.

Lacazette and Aubameyang were also both on the pitch at the same time for 30 minutes during the 3-1 victory over West Ham but that was more of a comfortable victory for the Gunners.

Ahead of the clash against Cardiff, Emery had always opted to keep one of his lethal finishers on the bench and bring them on in the second half.

The Gunners manager was asked about the potential dangerous-looking attacking partnership being utilised again and Emery seemed to downplay the idea by acknowledging that it was possible but admitting the both could still have an impact from the bench.

“It’s the same,” said Emery when asked about playing Aubameyang and Lacazette together or as substitutes, as quoted by the Daily Mirror.

“It’s a process to know the combination on the pitch, with different players but I need and I want to start in the level, 11 players with good performances and also, we need in the balance of players, when the team needs to work in the pitch to help the team to find the win, to stay with the performance.

“The reason is that I am very happy with the last two victories in the Premier League and also with the performances and I want to push every player to be okay to help the team if for one minute, 30 minutes or half time or 90 minutes.”

Emery remarks may be a smokescreen to hide his plans for the clash with the Magpies as his vagueness didn’t really give any real indication whether the pair would start together in Saturday’s game.

With both Gunners attackers  hitting the mark in their last league outing, Benitez must have a plan to deal with both of them as it’s vital that his defence do what they can to limit either having chances as it will aid the Magpies’ quest for respectable results.

Therefore this means that Newcastle need to have a plan ready to deal with just one of the players from the get-go as well as a plan B ready to roll out in case both are deployed at the same time.