Newcastle must replace Hayden with Obiang 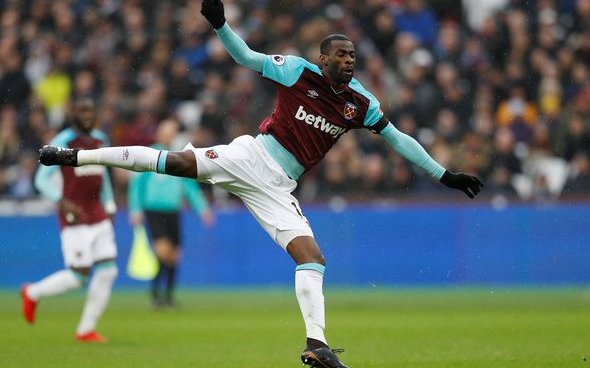 The Magpies are likely to need to find an adequate replacement for their 23-year-old as according to the Chronicle Brighton are plotting a potential £10million move to sign the defensive midfielder after he handed in a transfer request.

The newspaper’s report states that Rafa Benitez wants a replacement brought in for Hayden if he is to depart and the club should look no further than Obiang as he is the ideal person to arrive at St James Park this summer.

The current West Ham midfielder is believed to be on the chopping block at the London Stadium as Sky Sports previously claimed that the Hammers were open to offers for the 26-year-old.

Obiang, who is able to play as a central or defensive midfielder, flourished in the early stages of his 2017/18 campaign before all of his momentum was taken away from him due to suffering a knee injury.

The 26-year-old ended his 2017/18 campaign having made 27 appearances across all competitions but despite impressing ahead of his knee injury, it seems the Hammers are ready to get rid.

The defensive-minded midfielder whose strengths are his tackling ability, knack for shielding the ball from his opponent and his talent for being able to dribble past the opposition would see him able to play a role at St James Park if recruited.

After making 67 appearances in the Premier League, Obiang would no doubt like to stay in England’s top-flight in order to showcase his talents following his injury hit season.

This means the Magpies could have advantage in the race to get the midfielder who earns £55,000-a-week (Source: Spotrac), at the Hammers as according to Sky Sports’ report only Fiorentina, Atalanta and Villarreal are currently in the race to sign him.

Therefore with a replacement for Hayden likely to be needed the Magpies should look to snap up Obiang as he is not only available, he has previously proven that his talent is worthy of the Premier League.