Forget Townsend, Newcastle must go all out for Traore 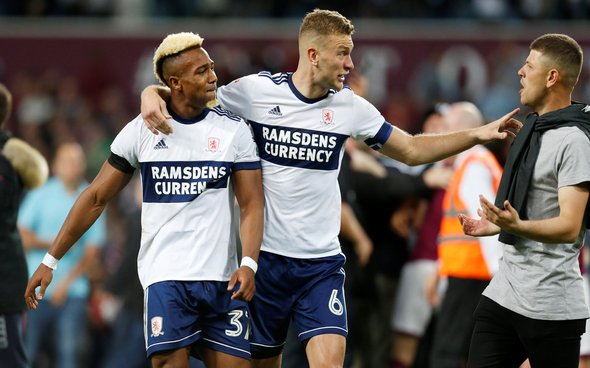 Newcastle United must give up their pursuit of Crystal Palace winger Andros Townsend and instead pursue the services of Middlesbrough’s 22-year-old trickster Adama Traore instead.

According to a report by The Sun the Magpies are in talks with Palace over an £18million deal to sign Townsend and while the winger is a proven Premier League player, Rafa Benitez would be better spending his money on Traore.

The 22-year-old Boro right-winger has blistering pace, bags of tricks and is an exciting talent that will get fans out of their seats at St James Park if he arrived.

Traore flourished in his 2017/18 campaign as he ended his season having registered 12 assists as well as scoring five goals in his 40 outings.

The exciting talent is four years younger than Townsend and looks capable of stepping up to deliver consistently good performances in England’s top-flight in the 2018/19 season if signed by a Premier League side.

Traore has previously played 37 games in the Premier League, registering three assists in the process, but was unable to be relied upon to deliver regularly good performances as his lack of experience saw his form be in consistent.

However the 22-year-old has clearly since improved and could deliver better performances than Townsend for many more seasons due to his younger age.

Also Palace could end up demanding more than £18million for Townsend as the Northern Echo suggested that he could end up costing the Magpies £22milion in order to get his signature.

The Magpies previously expressed an interest in Traore, according to a report in May by the Yorkshire Post, and The Sun are now reporting that he has an £18million release clause is his contract.

This means a deal for the 22-year-old might not only see a potentially better player arrive at St James Park, it could be a cheaper and easier deal to wrap up.

So with time ticking down on the transfer window, the Magpies should forget about signing Townsend and must sign Traore instead as the 22-year-old would be a better buy.