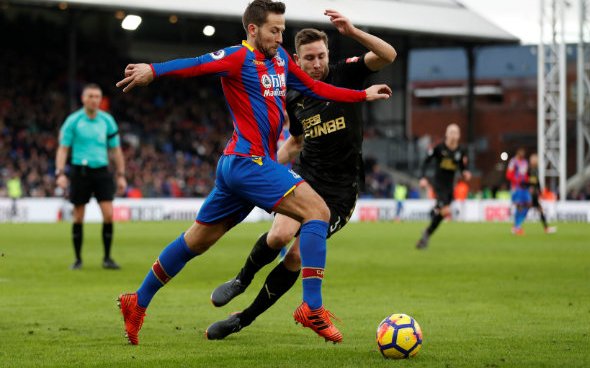 Newcastle United manager Rafa Benitez has made it very clear that he expects to be backed by owner Mike Ashley in the upcoming transfer window.

The Magpies will undoubtedly need to splash the cash this summer if they are to develop into a regular fixture in the top half of the Premier League, with several areas of the squad needing strengthening.

However, there will also be some bargain deals around which will not require Ashley to give up his beloved cash, and Newcastle may be able to find a couple of gems for minimal outlay.

One such gem that looks likely to be available in the coming weeks is former midfielder Yohan Cabaye, whose contract at Crystal Palace is about to come to an end.

As reported by Sky Sports, the 32-year-old France international is unsure on his future, with Palace looking to tie him down to a new deal before suitors come calling.

From what he says, Cabaye seems happy in London at Selhurst Park, but if there was one other club in England that could lure him away (aside from the top six) it is surely Newcastle.

Cabaye spent three seasons on Tyneside between 2011 and 2014, making 93 appearances for the Magpies, scoring 18 goals and providing 14 assists in the process.

The pass master ended up leaving in acrimonious circumstances when a dream move to PSG came along, but the club must put all that behind them and swoop for his return.

Jonjo Shelvey and Mo Diame need some quality additions alongside them this summer, with the Magpies having precious little else to call upon in midfield.

Mikel Merino is undoubtedly talented but has yet to get going in England, and Isaac Hayden has proved he cannot hack it at the required level.

Cabaye’s Premier League experience will be a massive boost to the Newcastle midfield, with his passing range and set-piece ability also coming in handy.

The fact that he is available for free makes this one a no-brainer, and Benitez must plot a swoop as soon as possible before Palace tie him down to a new deal.